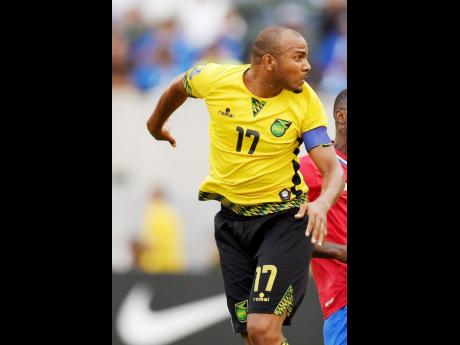 CAPTAIN Rodolph Austin scored the last of a multitude of chances as Jamaica beat Canada 1-0 in their CONCACAF Gold Cup Group B match at BBVA Stadium yesterday evening.

In the three minutes added for stoppages, the central midfielder made a pass wide to Garath McCleary then raced nearly 50 yards to meet the cross near the six-yard box and give the Reggae Boyz their first win of the 2015 championship.

The top two teams from the group will advance to the quarter-finals, following the completion of matches at BMO Stadium in Toronto on Tuesday.

On a very hot and humid afternoon, both teams competed evenly for the first 20 minutes.

In terms of chances created during this early period, Canada looked more dangerous. At the ninth minute, Tosaint Ricketts cut back the ball for Samuel Piette, but Jermaine Taylor was alert and charged down the shot.

Two minutes later, Simon Dawkins answered for Jamaica with an angled shot that was saved by the goalkeeper.

At the 12th minute, however, Kemar Lawrence was caught napping and Ricketts broke clear on goal, only to be thwarted by a brilliant save from Dwayne Miller, who advanced quickly off his line.

The Reggae Boyz gradually started imposing themselves on the game while moving the ball quickly out of the crowded midfield, passing the ball around and stretching the Canada team.

Through their utilisation of the channels more, they were able to make greater inroads into the Canada defence. Front men Ashley Giles and Dawkins were combining well, and the former set up the latter at the top of the penalty box, but his shot flew high.

Jamaica got their best chance of the half at the 27th minute when Garath McCleary whipped in a low cross from the right to Lawrence on the left. The left full-back beat goalkeeper Kyriakos Stamapolous, but David Edgar cleared off the line.

At the 33rd minute, with the temperature becoming unbearable, Cuban referee Yadel Martinez stopped the game for a heat break.

Jamaica almost scored on the restart, with Barnes flashing a header over goal. Then two minutes from the interval, right full-back Adrian Mariappa's header, from a McCleary corner, was deflected just wide of the post.

It was one-way traffic in the second half as Jamaica created openings to shoot at a rapid rate, but found it difficult to find a way past Stamapolous.

Je-Vaughn Watson, who appeared inspired, drove the team forward with several long dribbles, and would eventually be named Man of the Match.

Barnes smashed a free kick against the bar at the 60th, then worked himself to the top of the 18-yard twice, but hit one shot straight at the goalie and the other off target.

Jamaica never gave up trying, and made more opportunities to score. Mariappa arrived at the end of Jermaine Taylor's cross and stabbed wide of goal at the 89th minute, and just when it appeared Canada would survive, the captain struck.

Austin played a pass from centre midfield to McCleary down the right and sprinted like his life depended on it to the 18-yard box to meet the wide midfielder's cross and bury a header past Stamopolous.