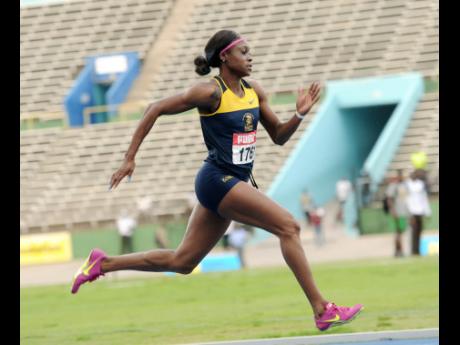 The fast-rising sprinter was followed to the line by American Barbara Pierre, 11.05, and Carina Horn of Russia, 11.10.

Thompson's sub-11 performance was easily the highlight for Jamaica at the meet.

Prior to the final, MVP/UTech athlete Julian Forte was disqualified from heat two.

In the men's 400 metres, Rusheen McDonald finished fourth in 45.04. The winner was Abdelalelah Haroun of Qatar in 44.63, while second went to American David Verburg in 44.72. Saudi Arabia's Yousef Masrahi was third in 44.79.

Meanwhile, in the men's discus, Morgan threw 59.32 metres for fourth place. The event was won by Apostolos Parellis of Cyprus, with 60.79m from Daniel Stahl of Sweden (60.26m) and American Rodney Brown, who finished third with 59.85m.