Tony Becca: Wake up West Indies, or else! 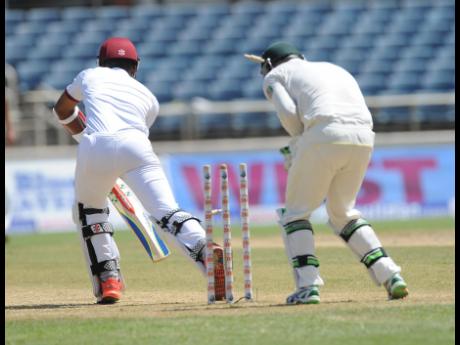 Dave Cameron has been returned as president of the West Indies Cricket Board for his second term and, no question about it, I, like most West Indians, wish him well.

I wish him well because, despite, in my opinion, his errors of judgement in the past, the people have spoken.

Most important, however, I wish him well because of his passion for the growth of West Indies cricket, as is evident in his fight to spread the money around so that all West Indian first-class cricketers can earn a little from West Indies cricket.

I also wish him well because of his resurrection of the home-and-away system in West Indies cricket so that the players can play more and, hopefully, develop their skills properly and fully.

And there is no doubt about it, despite the effort against England recently, and more importantly, because of their poor effort against Australia, West Indies cricket needs to lift its standard.

West Indian cricketers, all of them, at all levels, from club level to Test match level, need to improve drastically.

I hope Cameron finds the money to keep the home-and-away system going.

The younger folks do not like to hear this, but it is the almighty truth. The standard of West Indies cricket today is a far cry from what it was up to 20 years ago, and despite all the talk about modern times, it is because the quality of the players of today is way below the quality of those of yesterday.

Skill, however, is not restricted to one generation, or to any generation, and the surprising thing is that there are many young players today with the talent, which, if it is properly nurtured and exposed, could, or can, become great batsmen, great bowlers, and exciting fielders.

For a long time, however, I have been talking about the problems of West Indies cricket and Jamaica's cricket, about the players' need to dedicate themselves to the game, to train and practice individually more often and longer in order to improve their skills, and because cricket is basically an individual game in which one expresses one's self, the need to listen to coaches, but not to slavishly follow them.

In other words, a player who wants to go places should pick out, from the coach, the things which are good for his development.

It must be remembered that the players are the ones who go out onto the field on match days and not the coaches, the selectors, or the board members.

And while things like academies and seminars, getting players together in one place for a limited time for coaching sessions and things like that, while those things are important, it is more important to play cricket regularly, to do so in a good environment, in a pleasant atmosphere, and to train, practice, and compete against the best available at all times.

There is, or there was, a need for a longer first-class season, good pitches to play on, and most importantly, the need to get across to the players that when it comes to selection, only the best will be selected.

And the best does not necessarily mean the ones with the best numbers. Numbers and statistics can be misleading. They sometimes hide faults, technical faults, which the higher one goes, the more they are exposed.

West Indies players need, probably more than anything else, to feel proud once again.

Remembering that a good player is more or less a good player, be it in a Test match, in a 50-over, or in T20 match. If the idea is get the best players representing a country, or a franchise, and not so much to get as many players as possible involved or selected, that is the way to go.

Recently, Bangladesh knocked England out of the World Cup, and many, including former English greats, claim they saw it coming from a mile off.

players basically on statistics alone, a heavy reliance on technology by players and coaches, and the elite structure which now prevails in English cricket.

In English cricket, the England player no longer plays County cricket, or very, very little. He practices in the nets, he goes to an academy to practice, and he just does not get any match practice.

Apart from losing touch with the game, his absence from domestic cricket robs the English game of continuity, of the stars keeping in touch with the game and in so doing, mixing with the young players who will benefit from playing with and against him.

The West Indies are running the risk of emulating England.

According to one man, an upset, a shock, or a surprise result is when a weak team catches a good team on a bad pitch and beats them, or when a player from a weak team plays out of his skin and single-handedly beats a strong team.

When Ireland defeated the West Indies in the World Cup, according to the man, it could not have been an upset.

In his opinion, Ireland were better drilled, more confident, better versed in the cricketing fundamentals, like running between the wickets, and probably, unlike Bangladesh, they were not playing for their countrymen, for their brothers and sisters.