Boyz had to beat the heat, then Canada 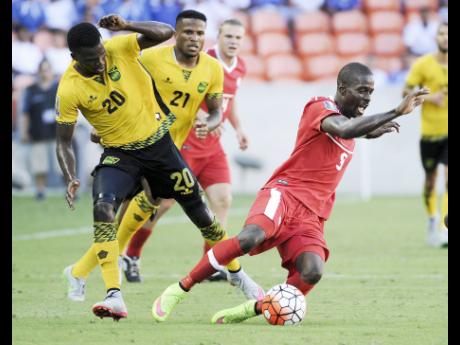 AP
Canada midfielder Tosaint Ricketts (9) is tripped by Jamaica defender Kemar Lawrence (20) during the second half of a CONCACAF Gold Cup match last Saturday in Houston. At centre is Jamaica defender Jermaine Taylor.

If victory is sweeter the hotter the battle, Jamaica are still savouring Saturday's delicious 1-0 CONCACAF Gold Cup win over Canada.

With temperatures soaring and humidity clinging uncomfortably, the Reggae Boyz snatched pole position in the run for quarterfinal berths with a late goal by captain Rodolph Austin.

But it came at a blistering price. Referee Yadel Martinez of Cuba was forced to call a "heat break" roughly half-hour into the match so players could cool down on the sidelines before continuing the onslaught at BBVA Compass Stadium here.

"It was hot even for Houston," admitted Jamaica striker Giles Barnes, who plays club football here with the Major League Soccer's Houston Dynamo.

Man-of-the-match Je-Vaughn Watson, who once played for the Dynamo but is now with cross-state MLS rival FC Dallas, agreed with his teammate.

"It was hard," Watson said.

While Canada's head coach, Benito Florio, admitted Jamaica were better, a view backed by match statistics which showed the Boyz dominating the game, he, too, conceded the effect of the broiling conditions.

"The players were tired," said Florio. "It was hot."

For Jamaicans like Adrian Mariappa, the experience of playing in near-90 degree heat and 65 per cent humidity was a revelation.

"Brutal," Mariappa, whose career has been spent in England, said. "I haven't played in anything like this in my life."

To a man, the Boyz agreed the match was a real test of willpower, which added relish to a victory that launched Jamaica to the top of Group B with a game left against El Salvador on July 14.

"It was very sweet," said Mariappa. "Not just because of the conditions, but it was a big game for us."

"It was just about adjusting to the heat," he explained. "Athletically, we're as good as anyone."

Jamaica's head coach, Winfried Schäfer, praised his team's unity and self-belief, which he believes enables the Boyz to overcome obstacles, even heat.

"The team spirit is fantastic," said Schäfer after the game.

So, too, its mental toughness.

"The team dug really deep," said goalkeeper Dwayne Miller, who made a brilliant save to deny Tosaint Ricketts early. "Coping with the heat showed a lot of character."

Jamaica team's staff also earned credit for keeping players hydrated, even before match day. There were no reports of cramps during the game. Schäfer, meanwhile, showed faith in a core of players, choosing a single substitution - Darren Mattocks for Simon Dawkins in the 65th minute - as Canada wilted, even after using all three subs to counter the conditions and Jamaica's relentless pressure.