Boyz have eyes on the Cup 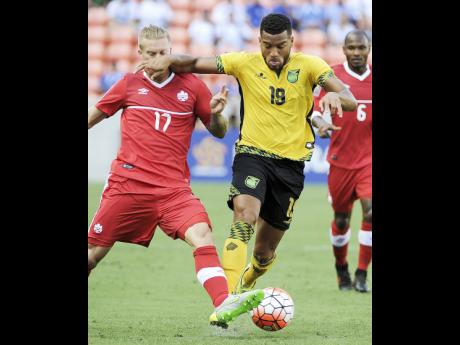 AP
Jamaica defender Adrian Mariappa (19) and Canada midfielder Marcel de Jong (17) vie for possession during the first half of a CONCACAF Gold Cup match on Saturday in Houston.

THE Reggae Boyz are on to something.

They have never won the CONCACAF Gold Cup, the biennial football championship for North, Central America and the Caribbean countries. Mexico and the United States have dominated that prized slot.

However, with more than body language, they are depicting a self-belief that they could etch their name among that elite number.

When asked how much motivation the win provided for their next group match against El Salvador at BMO Stadium in Toronto on Tuesday, fullback Adrian Mariappa said practically nil; they're already booming with confidence.

"It has never taken a win to energise us, to get us going for games. We're a very motivated group, and we believe in each other, and that's what's motivating us going forward because we know that we can achieve things," said Mariappa, who plays for Crystal Palace in the English Premier League.

"So this tournament is something we're all very focused about, achieving what we think we can. So going into the next game, we definitely want to get another positive result."

He added: "This team, I never ever fault the effort that everyone puts in, everyone puts in 100 per cent. I think the performance spoke for itself - we had 21 shots, 11 on target; they had four, and that speaks volumes.

Jamaica drew 2-2 at Los Angeles with Costa Rica in their opening match, and had excellent opportunities to take full points. Against Canada, Jamaica created chances all game, with Mariappa finding himself on the end of the action several times as the Reggae Boyz desperately chased the win.

"From an attacking point of view, we always looked a threat," the 28-year-old said.

"Some games, as a fullback, you can get pegged back quite a lot. Today, I was able to get up the pitch quite a lot. I could've had a hat-trick myself. I was disappointed with the two headers I had. I expected to score those chances," he said of finishes that barely went wide, one due to a deflection.

Now, Jamaica lead the group with four points, two ahead of Costa Rica and El Salvador, who battled to a 1-1 tie in the closing game at BBVA Compass Saturday. Canada stayed bottom with a point.

The top two will advance to the quarter-finals, while the third-placed team also has a chance, with two of three guaranteed spots. All the teams in the group travelled yesterday to Toronto for tomorrow's decisive group encounters.

Mariappa said: "We were all up for this game (Canada), and now we've a lot of confidence going forward to the El Salvador game."