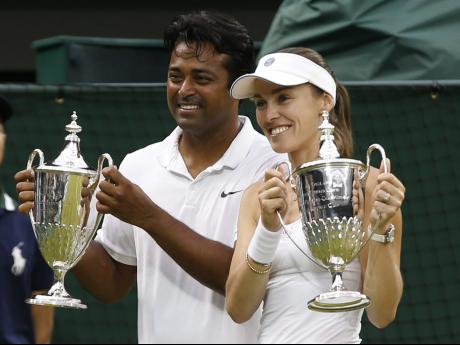 AP
Leander Paes of India (left) and Martina Hingis of Switzerland hold up the trophies after winning the mixed doubles final against Alexander Peya of Austria and Timea Babos of Hungary at Wimbledon yesterday.

Martina Hingis keeps adding to her collection of Wimbledon trophies.

The 34-year-old Swiss paired with Leander Paes of India yesterday to win the mixed doubles title, beating Alexander Peya and Timea Babos 6-1, 6-1 under the roof on Centre Court.

The 40-minute win gave Hingis her 11th Grand Slam doubles title and second in two days, after she combined with India's Sania Mirza to win the women's doubles on Saturday, coming from 5-2 down in the final set to beat Ekaterina Makarova and Elena Vesnina 5-7, 7-6 (4), 7-5.

Hingis became the first player to win both the women's and mixed doubles titles at the All England Club since Cara Black in 2004.

"It feels like it's a lifetime away," Hingis said. "The one yesterday, obviously, after 17 years last time here, the match, also the way we won it, was so much drama, coming back from 5-2 down.

"Today, I think the confidence that it gave me yesterday, to come out today with Leander, he was striking the ball, winners right and left. It was incredible, the chemistry we had today."

Hingis, who reached No. 1 in the rankings and won five Grand Slam singles titles in the 1990s, initially quit tennis in 2002 because of foot and leg injuries, then rejoined the circuit full-time in 2006. She announced her retirement again in 2007, when she was given a two-year suspension for testing positive for cocaine at Wimbledon. At the time, she denied taking the drug but did not appeal the ruling.