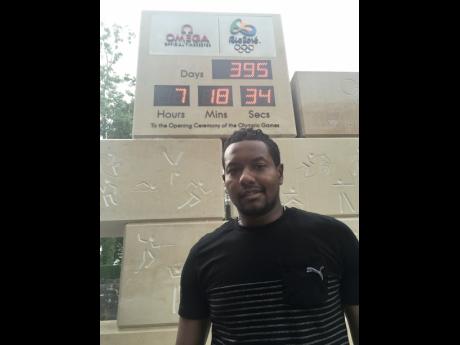 Contributed
Rashid Hall ... student at the International Academy of Sport Science and Technology in Switzerland.

One year into his position as a student worker at the University of West Indies (UWI), Rashid Hall, who was working in the sports department, looked at an international sports administration masters programme that he knew then and there that he wanted to pursue.

Having long held ambitions of contributing to his alma mater and his nation's development in sport, Hall knew that his current post at the institution would not be his arrival point. He also knew that in order to have the impact he desired, he needed to increase his knowledge in the area and enroll in a programme like the one he saw being offered by the sports education and research institution - the International Academy of Sport Science and Technology.

Hall, who left Jamaica last summer on a scholarship to the institution, is almost at the finish line of his Masters of Advanced Studies in Sports Administration and Technology programme, and as he looks forward to returning to the island and assist in its sport development, Hall also believes that there are several elements of the Swiss approach that can be adopted in Jamaican sports.

"Working with UWI was a very good opportunity. I started as a volunteer in the sports department, moved on to become a student worker and then went on staff full-time afterwards," Hall shared.

"I had a passion for sport for a long time, and so I decided to stay at UWI, and the experience over those six years were really good. I got a chance to be impactful on a number of initiatives there; started a few myself and just came to a point where I decided that in order to really achieve my long-term goals, I had to get the education at a higher level, as well as the international exposure, so I applied for this programme," said Hall, who was the recipient of a scholarship.

"I have been learning quite a bit. I had many opportunities which I don't see how I would have got otherwise - with places like the International Olympic Committee, International Basketball Federation. I actually led a programme working with the Union of European Football Associations Youth League in March; being there over two weeks working with them on that project was a big exposure for me. So the sky is the limit as to the opportunities here, and there are certainly no regrets as to making this choice," added Hall, who admitted that being away from his family has been a major challenge for him.

"When I left, it was me taking a leap of faith. I didn't know how I would manage financially for the entire year - I still don't know - but I have only two more months of teaching and I am making it, so I have to be thankful," said the 2012 Prime Minister Youth Award for Excellence in Leadership recipient.

Despite the positive experience, Hall is hoping to return home and play a part in improving the island's sport product.

"My classmates say I am too nationalistic, but we are from a small island that needs a lot of support. And I definitely think that having been here, I see so much potential in what we can achieve back home, so my intention is to help to bring sport forward. I also know that I need to develop my own profile because in order to build, I have to be networked, have the experience and know what to do, so this is important to me," said Hall, sharing his vision for Jamaican sport.

"One of the first things that come to mind is the general culture of sports. The general attitude towards sports here, if I was to give an estimation, I would say that 90 per cent of the people here are active in some form of sport at a recreational level, and it affects how people look at sports. It's not seen as a secondary thing but a part of life.

There are many corporate places here that have a 30-minute kick-about or workout during their lunch time. It's a part of how they operate, and something we can take from being from an area that has a lot of chronic diseases like diabetes, hypertension. It's something that can benefit us," Hall reasoned.

"From another perspective, administratively, most of the people here who are involved in sports studied sport or have some experience in sport. We are a young country in a global way so, hopefully, I want to be part of that new era of individuals who studied sport at a higher level and can be able to have a different perspective," said Hall.

"For us to move forward and understand the value of sport from a business and an administrative perspective, we have to learn it. And being in this place with 55 different international sporting associations and getting exposure to most of them has helped me a lot in that regard."

Hall, along with his 39 classmates from 29 different countries (including three-time 800m world champion and Olympic medallist Wilson Kipketer) is now preparing for an internship, and though he has his preferences, he is looking forward to the experience wherever it becomes available.