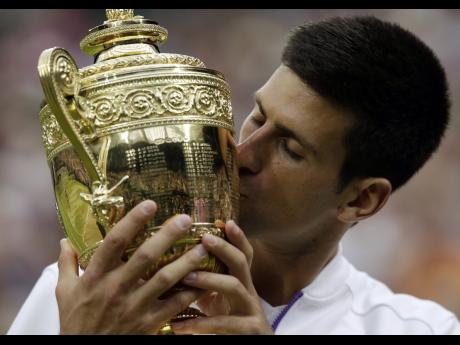 AP
Novak Djokovic of Serbia kisses the trophy after winning the men’s singles final against Roger Federer of Switzerland at Wimbledon yesterday. Djokovic won the match 7-6, 6-7, 6-4, 6-3.

A game away from a third Wimbledon championship and ninth Grand Slam title, Novak Djokovic sized up a 108 mph serve from none other than Roger Federer and stretched to smack a cross-court forehand return winner.

Two points later, Djokovic again took the measure of a serve from Federer, this one at 123 mph, and delivered a down-the-line backhand for another return winner. After this one, Djokovic bellowed.

"I roared because I felt like that's the moment," Djokovic would say later. "Now is the time for me to close this match out."

"It feels, obviously, good when you make a return winner out of Roger's serve on the grass," Djokovic said, "but it doesn't happen too often."

Over the past three seasons, Federer has reached two Grand Slam finals - both at Wimbledon, both against Djokovic, both losses.

"You sort of walk away empty-handed. For me, a finalist trophy is not the same," a grim-faced Federer said. "Everybody knows that."

At Wimbledon in 2014, Federer won 88 of 89 service games through the semi-finals, then was broken four times by Djokovic during the five-set final.

This fortnight, Federer won 89 of 90 service games entering the final, then again was broken four times.

"It takes a little bit of everything: recognising the moment, having the good intuition, following your instincts of where the serve is going to go, being in the right balance," Djokovic said.

Djokovic's serve was stout, too: He saved six of seven break points. On a windy afternoon, Federer was simply not the same height-of-his-powers player who defeated Andy Murray in the semi-finals. Pressured by Djokovic's body-twisting ability to extend points, Federer committed 35 unforced errors; Djokovic made 16.

Federer and Djokovic have played 40 times; each has won 20.

"Novak played not only great today," said Federer, 33, the oldest Wimbledon finalist since 1974, "but the whole two weeks, plus the whole year, plus last year, plus the year before that."

Federer might very well be the greatest of all time, as some say, but right now, the best in the men's game is Djokovic.

He won the Australian Open in January, then was the runner-up at the French Open last month, denying him a career Grand Slam. Go further back, and Djokovic has reached 15 of the past 20 major finals, winning eight.

Still, most spectators were pulling for Federer. So quiet between points that pre-serve ball bounces could be heard, the crowd voiced a collective "awwwww" of lament after a fault by Federer or a mid-point "ooooh" of excitement when he conjured up something exquisite.