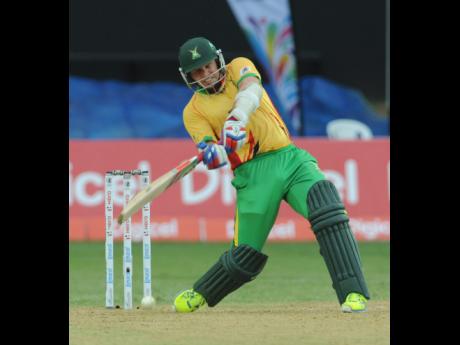 Ian Allen
Brad Hodge of the Guyana Amazon Warriors hitting out during his top score 65 not out during the Caribbean Premier League T20 match at Sabina Park yesterday. 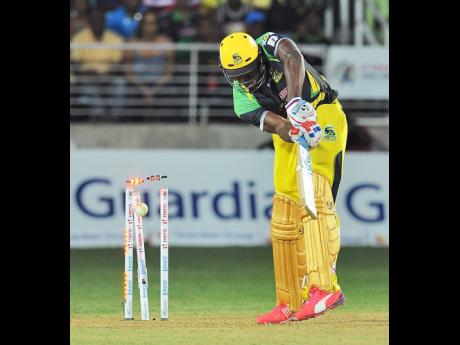 Jamaica Tallawahs' hopes of making it to at least the semi-finals of the HERO Caribbean Premier League Twenty20 took a major hit yesterday when they went down by 84 runs to the Guyana Amazon Warriors at Sabina Park.

The Warriors, who started the day bottom of the six-team standings on four points, first made a very competitive 179 for three off their maximum 20 overs.

The Denesh Ramdin-captained team then restricted Jamaica to a mere 95 off 15.5 overs.

The result lifted the Guyana Amazon Warriors, who have four preliminary-round matches remaining, off the bottom of the table, while for the Tallawahs, with two games remaining, it kept them in third position.

didn't get it right

"It was one of those games where we just did not get it right from the start," said Chris Gayle, captain of Jamaica.

"Our bowlers did not get the ball in the right areas, and the Warriors capitalised for what I thought was a pretty good score.

"A score of 170-odd on a Sabina Park wicket was always going to be a challenge, and then to lose four wickets in the power-play overs, really put us on the backfoot."

The Tallawahs, needing to score close to nine runs per over to record their fifth win of the season, failed to get out of first gear after losing their first wicket in the second over, and their fourth wicket before the end of the sixth.

Chadwick Walton, who, last Thursday, put in a man of the match performance against St Lucia Zouks, was the first to go for zero. His mistimed pull shot was caught close to the third-man boundary.

The flamboyant Chris Gayle, who has been leading the Tallawahs batting all season, was next to go, caught at long on off Sunil Narine's first ball of the innings for 11.

His dismissal brought a hush around the near-capacity ground and was greeted with wild celebrations by members of the Guyana team.

Nkrumah Bonner followed soon after in the fifth over when after facing eight balls, he attempted to hoist spinner Veerasammy Permaul over mid-wicket and was caught close to the boundary.

The fourth victim of the sequence was that of hard-hitting Australian Chris Lynn, who, after hitting a six and two fours, top-edged fast bowler Marchant de Lange to third man for 16.

At 31 for four, the Tallawahs thereafter needed other batsmen, who are yet to set the tournament alive, to come to the party, however, none did as there was a constant procession to the pavillion.

Big-hitting AndrÈ Russell made a top score 28 before he was bowled in the 14th over.

Emerging fast bowler 22-year-old Ransford Beaten picked up four for nine off 2.9 overs, while there were two wickets for Narine and de Lange.

Earlier, the Warriors were led to a fine total by man-of-the-match Australian Brad Hodge, who slammed an unbeaten 65 off 30 balls. He hit six massive sixes and three fours.

Earlier openers Assad Fudadin and Lendl Simmons put on a solid opening standing of 71 before falling for 54 and 36, respectively.

"Hodge kept going on, and on. It was a brilliant innings by him," said Ramdin. "It was very important that we get a win in Jamaica, and I am happy that we did. It is just for us to now go back home, repeat a similar performance so that we can qualify for the semi-finals."