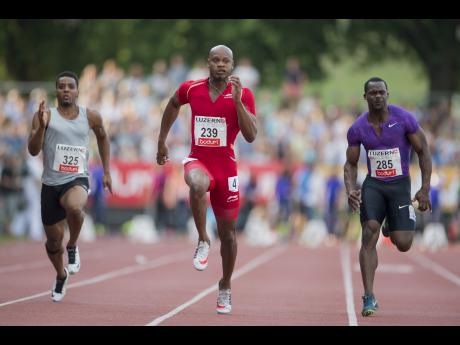 AP photo
Asafa Powell (center) Clayton Voughn of the US (left) and Jamaica's Nesta Carter in action during the men's 100m race at the International Athletics Meeting in Lucerne, Switzerland today.

Powell, who finished second behind Justin Gatlin in his last outing, was registering his sixth sub-10 clocking of the season.

Former World champion Yohan Blake, finished second in the men’s B race in 10.20.

In the women's equivalent, Natasha Morrison ended second 11.17 behind the winner Charonda Williams who clocked 11.14.

Veronica Campbell-Brown was second overall in the women's 200 metres time final in 22.61 seconds. Jamaican, Shericka Jackson won the B section in 22.87 seconds but the overall winner was American Charonda Williams in 22.32 seconds.

The event was won by South African Wayde van Niekerk in 19.94 seconds.