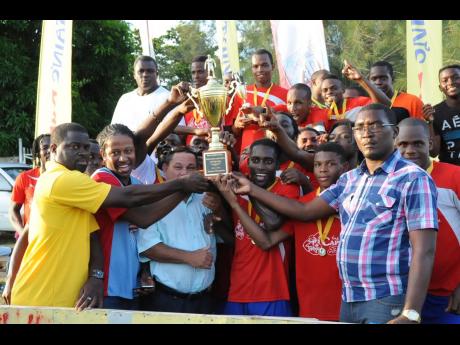 Lucea FC will once again parade their skills in the JFF/Western Confederation Super League this coming season, as they were crowned Captain's Bakery and Grill/Charley's JB Rum Hanover FA Major League champions on Sunday at the Watson Taylor Park.

They totally dominated the final to ease to a comfortable 3-0 win over Mt Pelier FC, the same team they defeated in the mid-season showpiece game earlier in the season, to stamp their authority on the rest of the competition, much to the delight of their coach, Marlon Gray.

"We are deserving of this victory. It is easy to say that we are worthy champions as was demonstrated here," said Gray.

"But all of this means nothing if we fail to remain in the confed and push for that title," reasoned Gray.

No match for Lucea

Mt Pelier were no match for Lucea, who went in front from a stunning Oshane Kerr free kick from 30 yards out in the 23rd minute of play.

Evron Laing, the Mt Pelier goalkeeper, was again breached when Choviam Anderson tapped in from close range to double the lead in the 73rd minute. The game was made completely safe in time added on for stoppages after 90 minutes, when Dalton Hylton fired a low shot from distance past Laing.

Kerr was named as Man-of the-Match for his outstanding goal.

Lucea, who were relegated from the Super League two seasons ago, will be hoping for better luck this time around, and coach Gray knows exactly how the club will be going about that business.

He said there are plans to overhaul the team to include talented players who are currently with other teams in order to make them more competitive.