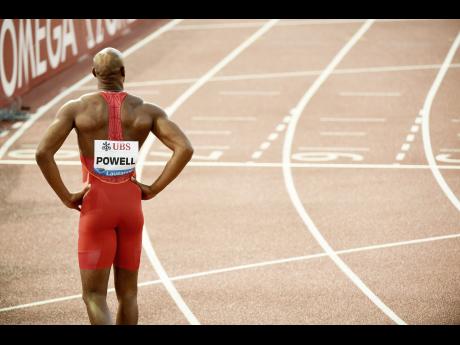 AP
Jamaica's Asafa Powell stands on the track after the men's 100m race at the IAAF Diamond League athletics meeting in the Stade Olympique de la Pontaise in Lausanne, Switzerland last Thursday, July 9. Powell placed second in the event which was won by American Justin Gatlin.

At this point in his career, ace sprinter Asafa Powell could be aptly described as "the proverbial stone that the builder refused which has now become the head corner-stone. Such have been the recent ebbs and flows in the chequered career of this elite Jamaican sprinter.

I have myself been quite critical of Asafa over the years due mainly to his notorious history of choking on the big occasions spanning the 2004 Olympics in Greece, the 2007 World championships in Japan, the 2008 Olympics in Beijing, the 2012 Olympics in London, a

period during which Asafa was at times the world record holder in the 100 metres and consistently the top sprinter in the world, yet a period in which he failed repeatedly to secure a single individual Olympic or World championship title.

In principle, I will always have issues with top sports performers showing consistency and quality over time, but notoriously underperforming at the highest level on the big occasions. After another trademark 'mini melt down" in what has been to date the biggest race of the season in Lausanne, Switzerland, where Asafa faced off with Justin Gatlin and Tyson Gay and yet again failed to execute to his full potential, I am now fully convinced that you really cannot teach this old dog any new tricks and that Asafa is still very much Asafa.

Having said all that though, respect must be given to Asafa Powell not just for the invaluable role he played in the elevation of Jamaica's 100m sprinting to where it is today. Asafa Powell is arguably the best technical sprinter of all time. The former world record holder is easily the most consistently fast 100m sprinter to have ever put on a pair of spikes. His undisputed title as the sub-10 king is testament to that fact.

Who would have predicted that in 2015 heading into the World championships in Beijing that, after all he went through in his injury-plagued career, his suspension for a failed drug test, his split from long-time coach Stephen Francis, that Asafa Powell at 32 years old would be

leading Jamaica's charge into the World Championships as our standard-bearer in the 100m event.

That is the reality of here and now though, with Usain Bolt desperately struggling for form and fitness, with Blake yet to fully recover from serious injury, and with the next generation of sprinters in a prolonged transition mode. Asafa is once again the man. The pressure has once again fallen squarely on the shoulders of this old, experienced warrior. As to whether or not Asafa with a season's best of 9.81 will finally overcome the lightning 9.74 and counting pace of the imperious Justin Gatlin as well as the threat of the ever-tenacious Tyson Gay on the big occasion, is yet to be seen. I would not bet on it.

Based on what we know of Asafa, expectations should be moderated by common sense and history. For sure, he looks a much more relaxed sprinter and different individual. His race execution generally has improved some in this, the first full season of taking coaching instructions from his brother Donovan. Asafa seems to be a man on a redemption mission.

This is one occasion, however, where heading into a major championship, I would be willing to settle for a simple medal podium finish for Asafa. My sincere hope is that he will not totally implode and be right there in the mix in that 100m final in Beijing. He should at least win a medal, if he wins the gold it will be a massive bonus.

I am already impressed at seeing a liberated Asafa Powell this season so emphatically bouncing back from multi adversity to remain a relevant force as an elite sprinter. Win or lose in Beijing, I simply say RESPECT IS DUE TO ASAFA, BUT ... . Unfortunately, there will always be that but.