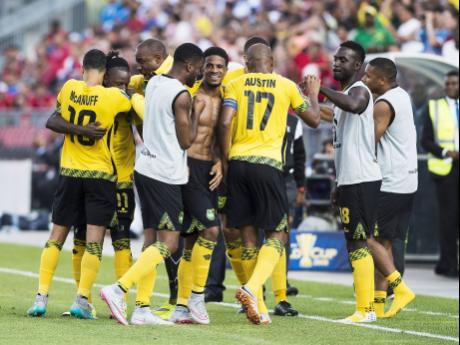 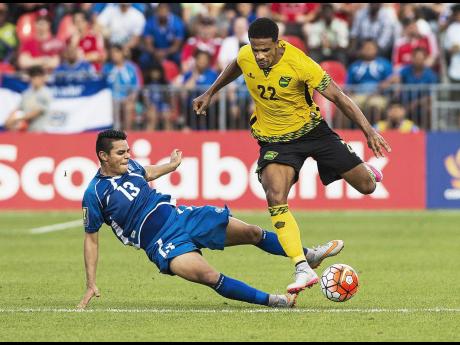 Garath McCleary extended his rich form with a 72nd-minute goal that gave Jamaica a 1-0 victory over El Salvador in their Group B CONCACAF Gold Cup football match at BMO Field here yesterday.

"I'm very, very happy about my team. I trust my players," Jamaica head coach Winfried Schäfer said. "Everybody fight together, all for one, and I'm very happy, very proud of my players."

Victory gave the Reggae Boyz top spot in the group on seven points and they will move on to play Haiti, who finished second in Group A, in a quarter-final match in Baltimore on Saturday.

"We were massive underdogs coming into this tournament," McCleary said. "To come out on top is fantastic!"

Jamaica finished the game with 10 players after striker Darren Mattocks was shown a second yellow card at the 80th minute. Like many others against the Jamaica team, it appeared a dubious decision, with the 24-year-old striker blocking an attempted pass with the outside of his left boot.

"I don't want to talk about the referee," Schäfer commented.

However, he said the Jamaica team would be seeking to have cards overturned.

"We have to talk; we have 24 hours to protest," said Schäfer, a German whose English is not fluent.

The Reggae Boyz were forced to make two early substitutions through injury as central defender Jermaine Taylor had to leave the game at the seventh minute with what appeared a thigh injury, and goalkeeper Dwayne Miller was forced off when he got hit in the head as he advanced and took the ball just ahead of the onrushing Pabo Punyed.

"Miller is in hospital and I hope all the best for him," a concerned Schäfer said. The goalie was replaced by Ryan Thompson at the 22nd minute and central defender Jermaine Taylor was replaced by Michael Hector.

"We have four good goalkeepers," the head coach said of Thompson, who made some good saves, especially a big-time double save at the 28th minute when he first dived to keep out Punyed's 25-yard drive then got up instantaneously and used his legs to block a follow-up off the rebound by Andres Flores.

McCleary's goal took his tally to two in the tournament as he netted the opener in the 2-2 draw against Costa Rica in Los Angeles. He also set up the winner in last Saturday's 1-0 win over Canada at BBVA Compass Stadium in Houston when Rodolph Austin scored.

This time, he was on hand to make a simple tap-in after El Salvador goalkeeper Derby Carillo spilled a shot from Jobi McAnuff. The latter was set up by striker Darren Mattocks, who shook off a defender on a counter-attack and rolled the ball to the top of the penalty box.

The Reggae Boyz would get another clear opening minutes after at the 78th when Je-Vaughn Watson hit a wicked diagonal pass over the defence for the overlapping Alvas Powell. However, with the goalkeeper at his mercy, Powell opted to control the ball instead of shooting. His first touch was bad and the goalkeeper had an easy catch.

Powell had been brought on to the field for striker Giles Barnes, a strategy to tighten the defence as the Salvadoreans were dominating and threatening to score, with neat combinations and shots on goal as they penned in Jamaica, who played on the counter for goal opportunities in the second half.