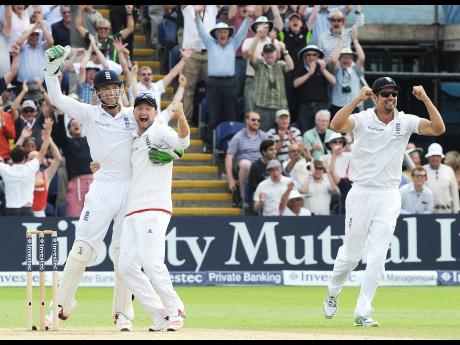 The cracks appear to be showing in the normally-invincible Austra-lian cricket team.

The second Ashes Test starting at Lord's tomorrow follows hard on the heels of England's comfortable 169-run victory in the first game in Cardiff.

Australia's most effective bowler in Cardiff, Mitchell Starc, has been receiving injections in an ankle injury, and veteran wicketkeeper Brad Haddin has withdrawn from the second match for what Cricket Australia described as "family reasons". The withdrawal means a Test debut for New South Wales wicketkeeper Peter Nevill.

Haddin faced criticism in Cardiff for dropping Joe Root, who went on to score a crucial 134 in England's first innings. Root was on 0 when Haddin put down the catch.

Pace bowler Peter Siddle is tipped to replace Starc if he does not recover.

Australia coach Darren Lehmann was clearly disappointed with the placid wicket in Cardiff that negated the bouncers used frequently in the past to intimidate England's batsmen. "I'd just like to be able to bowl a bouncer on day one. That'd be nice," he said after the defeat in Wales.

The Lord's strip is usually a perfect Test wicket, offering a reasonable amount of pace and height, but does not have the bounciness often found in wickets at London's Oval or Australia's WACA and beloved by quick bowlers.

Having arrived in England tipped to easily retain the Ashes, Australia is now facing criticism that its squad is on its last legs, injury-plagued and generally too old. Several of the tourists, notably allrounder Shane Watson (34) and Haddin, looked awkward in Cardiff, and several other players are in their mid-30s.

England has already announced an unchanged team to the one that surprised the Australians in Cardiff.

England's new coach, Trevor Bayliss, has only just started his job, and the team revealed a fundamental change in strategy in the series against New Zealand earlier in the summer, with the aggressive batting tactics delighting the fans.

That experiment started before Bayliss was appointed and continued in Wales when the batters played with freedom and real determination.

Bayliss, an Australian, advised his players to beware his countrymen when they are cornered.

"They don't like losing," he said after the Cardiff game. "They have a proud record and losing will mean they come out in the next game trying to prove a point and trying to make up for their performance in this match."

England captain Alastair Cook did not succeed with the bat in Cardiff but was widely praised for his tactics in the field, especially the bowling changes and field placements. The new generation of Test batsmen - Gary Ballance, Ben Stokes, Jos Buttler, and Moeen Ali - all scored good runs and showed little fear of Australia's three-man pace attack.