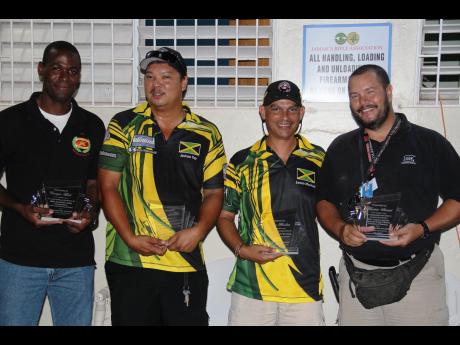 THE Jamaica Rifle Association (JRA) recently honoured five of its members for advancing the sport of practical shooting administratively and on the range.

Alastair Stewart, regional director, Inter-national Practical Shooting Confederation (IPSC) Jamaica, was lauded for his work in the development of competitive shooting in Jamaica and the Caribbean.

Stewart's campaign to have practical shooting in Jamaica conform to IPSC world standard has been successful in getting other ranges in joining the JRA as affiliates, thereby increasing that body's membership base in the country.

Stewart was the only Jamaican to work as a range officer at the IPSC World Shoot, held in Frostproof, Florida, last October.

He has also staged many range officer seminars, including one in The Cayman Islands recently, to enhance safer and smoother-run competitions.

On the range, Lieutenant Dwayne Ford, captain of the small bore rifle group, was hailed for his recent performance at the Caribbean Cup in Puerto Rico, a 596-point shoot out of a possible 654, in the 50-yard shoot, placing sixth overall of 17 competitors.

Ford was competing against a field of international shooters, all travelling with professional coaches.

Small bore is an Olympic sport, which Ford believes could be Jamaica's next conquest. He leads a small, young group and noted that the competition was good for exposure and experience as his aim is to be in the Olympic Games in the not-too-distant future.

The practical pistol group honoured three members - Lesgar 'Speedy' Murdock, Andrew Yap and Lennie Moulton. The trio has been racking up wins in their respective classes and divisions since February, the start of the 2015 shooting season.

The Jamaica Cup will be staged at the JRA's Mountain View range on the 25th and Woodleigh, Clarendon, the following day.

The group will afterwards travel to the USA's IPSC Nationals in Florida to compete in a week-long tournament, over 30 stages, requiring 600 rounds of ammunition.

The ultimate campaign for the practical pistol group is to be selected to represent Jamaica at the IPSC World Shoot in France 2017.