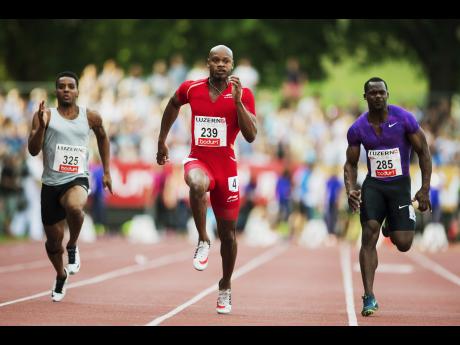 AP
Jamaica's Asafa Powell (centre) winning his heat of the men's 100 metres in 9.87 seconds at the International Athletics meeting in Lucerne, Switzerland yesterday. Nesta Carter (right) was second in 10.06. At left is American Clayton Vaughn.

Asafa Powell continues to rev into gear ahead of the IAAF World Championships, set for Beijing, China, next month, winning the men's 100m at the Spitzen Leichtathletik meet in Lucerne, Switzerland, in a time of 9.87 seconds - his sixth sub-10 seconds run of the season.

Also at the meet, which took place at the Stadion Almend, Veronica Campbell-Brown lowered her season's best in the 200m, while there were struggles for Warren Weir and Janieve Russell in the men's 200m and women's 400m hurdles, respectively.

Powell's time bettered that of Nesta Carter, 10.06, and Kemar Bailey-Cole, 10.10, with all three competing in the last of three heats in the timed final set-up.

The former 100m world record holder took to his Twitter account to express his satisfaction with his effort and also had some words of encouragement for the returning Yohan Blake, who ran 10.20 to finish second to Jak Ali Harvey, 10.15, with Egwero Ogho-Ogene, 10.21, taking third.

Also in that heat, Michael Frater finished sixth in a time of 10.30 and another Jamaican, Winston Barnes, 10.39, was eighth.

"Glad I finished healthy ... step by step and race by race. Yohan Blake, don't give up bredda, the hard times don't last 4eva. God has ur back #TeamJamaica," read Powell's tweet.

Despite finishing second to American Charonda Williams (22.32), Campbell-Brown - who is also coming off a season best 10.99 in the 100m in Budapest last week, continues to show improvement after a sluggish start to her season - ran her fastest 200m of the year after crossing the line in 22.61. Tiffany Townsend (USA) was third in 22.62.

World Championships 200m silver medallist Warren Weir was far from his best in his 200m heat, finishing fifth in 20.45 just ahead of Tyquendo Tracey, 20.59.