Day’s big chance to show her worth 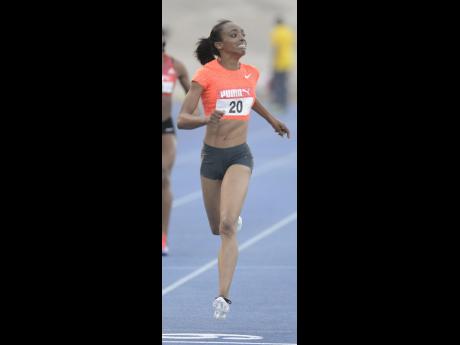 National champion Christine Day faces a test of her true credentials, while Commonwealth champion Stephenie-Ann McPherson will look to rediscover her form as they come up against a motivated women's 400m field at tomorrow's IAAF Diamond League meet in Monaco.

Day matched her personal best 50.16 seconds on her way to winning ahead of the more fancied McPherson at the Jamaica Athletics Administrative Association (JAAA)/Supreme Ventures Limited National Senior Championships a few weeks ago.

However, it isn't the first time she has flattered to deceive, posting an impressive time at the National Stadium before failing to reproduce that form on the circuit, where McPherson has established herself as a serious contender for top places.

Not as fast as before

For instance, after running 50.16 at the 2014 trials, Day failed to dip below 51 seconds for the remainder of the season and has this season posted a 51.57 seconds mark in her lone outing since trials.

McPherson, who has finished ahead of Day in the vast majority of their contests, didn't look like herself at the National Championships and is coming off a 50.50 win in Luzern.

Still, with Britain's Christine Ohuruogu and USA's Francena McCorory, who will be competing for the first time since failing to qualify outright for the USA's team to the IAAF World Championships next month expected to feature prominently in Monaco, it's hard to look beyond McPherson as the better placed Jamaican to challenge for a win here. It's hard to tell what kind of shape she will be coming into the meet in, but she does have four wins against the American and knows that a win here will give her a timely boost ahead of the World Championships.

McCorory will be determined to make a statement here and continue her strong showing on the circuit, where she has won three of her four starts this season.

Day, the bronze medal winner at the Commonwealth Games, has shown that she can do well in one-off situations, but she must relish this opportunity to show some consistency and confirm her ability to match up with the big girls on the international stage.

"Everyone has their favourites, but I know what I can do and, trust me, things will be very different this year," Day said after her win at the National Championships in response to questions around her inconsistency.

She will go a long way to really answering those questions on the track with another impressive run.