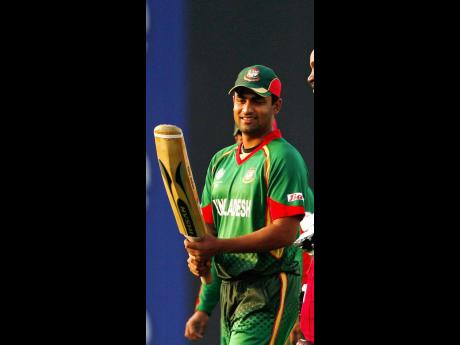 Zouks chased 91 to pull off victory in the last ball of the innings in a gripping encounter, reduced to nine overs a side after rain delayed the start of play by more than two hours at the Queen's Park Oval.

Opener Johnson Charles returned to form with a responsible knock of 41 for Zouks while an all-round effort from Jacques Kallis who scored 38 and grabbed three wickets, heavily influenced the tide of the match as momentum swung back and forth.

However, it was Ross Taylor who came to the party as the match appeared headed for a super over, but, in dramatic fashion, smashed a six of the penultimate ball and a single of the final delivery to take Zouks home and silence a packed partisan oval.

Batting first after winning the toss, Pakistan made 287 for eight in 50 overs. Sri Lanka reached the target with 11 deliveries to spare, levelling the five-match series at 1-1 after Pakistan won the opener by six wickets.

Perera smashed two sixes and 13 boundaries for a 25-ball 68. His half-century matched fellow Sri Lankan Sanath Jayasuriya for speed, with the record held by AB de Villiers of South Africa with 16 deliveries. Tillakaratne Dilshan made 47 while Chandimal hit an unbeaten 48 off 63 deliveries to seal victory.

Bangladesh recorded their first ever series victory over South Africa yesterday after securing a comfortable nine-wicket win by the Duckworth/Lewis method in their third and deciding one-day international.

Openers Soumya Sarkar and Tamim Iqbal combined for a 154-run opening partnership as Bangladesh wrapped up victory by reaching their target of 170 in just 26.1 overs - losing only one wicket - after South African managed 168-9. The hosts won the three-match series 2-1.