Injured defender looks to the future 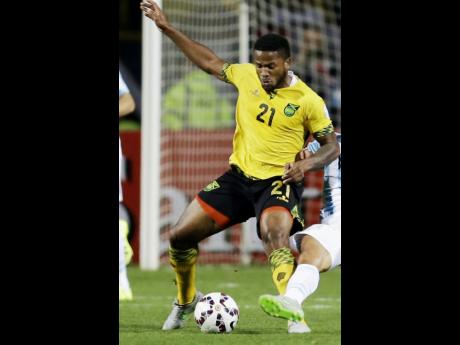 SENIOR national defender, Jermaine Taylor, is overcome with disappointment because of a hamstring injury that will prevent him from representing the country any further in the CONCACAF Gold Cup.

The 30-year-old central defender has been representing the Reggae Boyz for more than eleven years, got injured as he prepared to challenge for the ball at the seventh minute of Jamaica's third and final Group B encounter against El Salvador at BMO Field in Toronto on Tuesday.

He was immediately substituted, with Michael Hector replacing him at centre half.

"It's not a good feeling. One of the things I wanted to do is make a mark. Not playing much in the Copa America I told myself that when I get the chance I'm going to make a mark in the Gold Cup, which I had been doing, but I got injured and will just have to try and stay strong and move forward from here and try and get the recovery as fast and best as possible," he told The Gleaner.

The Reggae Boy, who represents Houston Dynamo in North America's major League Soccer (MLS), had only played the last 20 minutes against Argentina at the Copa America last month in Chile, with Jamaica competing as an invited guest.

He had played in every minute for Jamaica at the Gold Cup and was looking to go further.

"I think I've done well. As we speak right now I'm very disappointed knowing I can't finish off the tournament on a high and give off a good performance for the quarter-finals and the semis, hopefully onto the final," he said.

Team physician Dr Ivor O'Connor said preliminary investigations confirmed Taylor's unavailability for the rest of the tournament, but noted that a full assessment was needed.

"Taylor sustained a quadriceps strain during the first half of the game. Basically it's going to rule him out of the competition," O'Connor revealed.