Announcing around the world 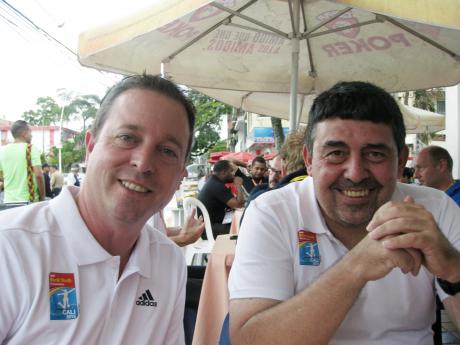 SITTING inside a stadium during a track and field championship, it's so easy to take for granted, the voices we hear over the public address system. We hear them in the back of our heads as they announce the results or call races without thinking about the faces behind the voices.

Paul Swangard and Lorenzo Mejino are the voices behind the microphone at the 2015 International Association of Athletics Federations (IAAF) World Youth Championships, here.

Swangard is an American who got his start at the University of Oregon, Eugene, where he is an administrator. Mejino is a full-time announcer from Barcelona, Spain, who got his start during the Olympic Games in his home city in 1992.

Now he travels all around the world doing events for the International Olympic Committee (IOC) and IOC sanctioned events including swimming championships.

Swangard, who is a former sprinter, told The Gleaner that he began by just covering a few events

"And luckily I was in a place where I was able to do more and more small events," he said.

That eventually led to larger events and he has covered meets for the IAAF including last May's World Relays in The Bahamas.

Mejino, a native Spanish speaker, speaks several other languages including English and spends much of the year travelling while Swangard, who is married with two children, has chosen to do fewer events.

He attended a meet in Edmonton, Canada just before coming to Cali, while Mejino was in Barcelona.

It's a tiring job. The morning sessions begin at 9 a.m. and but for a short break for lunch, the duo continues from around 5 p.m., again until the championships end between 9 p.m. and 10 p.m. each day.

"I don't eat a lot during these events because we are stuck in the booth for a long time so I can't leave," Swangard said.