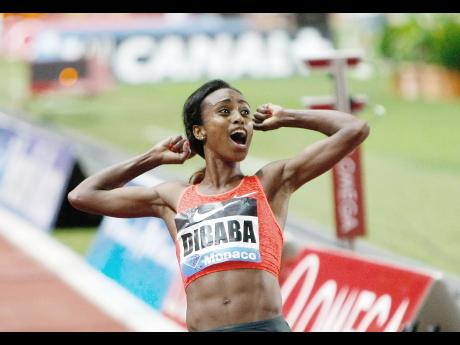 Long before a five-minute firework show brought down the curtain at the Monaco Diamond league meet yesterday, Ethiopian Genzebe Dibaba sparkled inside the Stade Louis II, taking down a 22-year record in the women's 1500 metres after a lightning final lap.

Jamaicans Stephenie-Ann McPherson and Christine Day were solid in the women's 400m, while Nickel Ashmeade continued to work out his kinks in a 100m race that saw Justin Gatlin win again without much test. Asbel Kiprop ran the fifth fastest men's 1500m in history, and Joe Kovacs was also impressive, but it was the wiry Ethiopian who grabbed the headlines in an electric meet in Principality.

Second place went to Sifan Hassan (Netherlands), who ran a national record, 3:56.05, with American Shannon Rowbury's Area Record, 3:56.29, getting her third place in a race where nine of the 14 finishers posted personal best times.

"I have been dreaming for this record for a long time ... . I have been training for it and I want to thank God for this," said Dibaba afterwards. "The pacer did a very good job and I told myself I had to go and get the record."

Ashmeade, who is coming off a 20.96 performance in the 200m in Lausanne noted: "I will be ready for Beijing. I just have some personal stuff dealing with, but it's nothing too serious."

In the women's 400m, McPherson, who said she was comfortable with her run after a late start to her season due to injuries, clocked 50.41 to finish behind American Francena McCorory, who ran a world leading 49.83, with another Jamaican, Christine Day, 50.66, taking third.

It was certainly the middle distance runners' night to shine with Kenyan Asbel Kiprop clocking the fifth fastest time ever in the men's 1500m, after crossing the line in 3:26.69 ahead of Taoufik Makhloufi (Algeria), 3:28.75, and Abdelaati Aguider (Morocco), 3:28.79.

In the men's shot put, Joe Kovacs turned in the best performance seen in the event since 2003 with an impressive 22.56m mark to take the event and extend his lead in the Diamond Race.

Bershawn Jackson continued to have things his way in the men's 400m hurdles, overpowering a strong field to win in a time of 48.23 as Poland's Patryk Dobek posted a personal best, 48.62 for second place ahead of Johnny Dutch, 48.67.

Sharika Nelvis, 12.46, won the men's 100m hurdles ahead of Kendra Harrison, 12.52, and Brianna Rollins, 12.56, with Dawn Harper-Nelson, who saw the green card with the rest of the field after seemingly twitching in the blocks, finishing fifth in 12.58.