England against the ropes 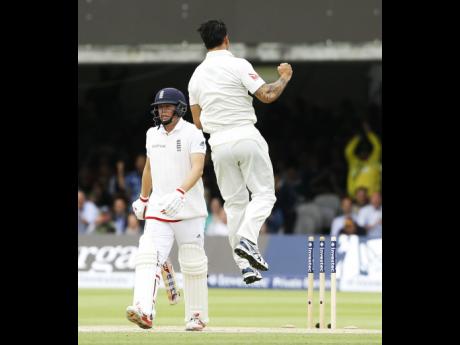 AP
England's Gary Balance (left) leaves the pitch after he was bowled by Australia's Mitchell Johnson (right) on the second day of the second Ashes Test match between England and Australia at Lord's cricket ground in London yesterday. 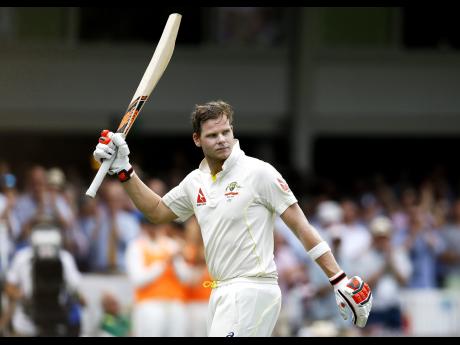 AP
Australia's Steven Smith holds up his bat to a standing applause from the crowd after being trapped leg before by England's Joe Root for 215 on the second day of the second Ashes Test match between England and Australia at Lord's cricket ground in London.
1
2

Australia dominated with the bat to post a first-innings total of 566-8 declared in the second Ashes Test at Lord's yesterday and then the bowlers ripped through the top order, reducing England to 30-4 at one stage.

Alastair Cook and Ben Stokes led a modest recovery, guiding England to 85-4 at the close of the second day, but leaving the home team with a mountain to climb to save the match. Stokes gained in confidence to reach 38 by the close, with captain and opener Cook on 21.

"We can't complain," Australia pace bowler Mitchell Johnson told reporters. "We batted exceptionally well and then we were able to work in partnership as a bowling unit. We're happy with the situation we're in now."

Bowling as if desperate for revenge after an embarrassing 169-run defeat in the first Test in Cardiff, the Australian bowlers tore into the England batting.

The Lord's wicket was criticised as placid for the first two days as Australia accumulated a big score. England's top order found it anything but easy-going as the top four were blown away within 10 overs.

Mitchell Starc, Johnson and Josh Hazlewood were all rampant, peppering England with full-length deliveries that swung and nipped back at them.

"All I've been trying to do is to bowl fast and accurately," Johnson said after taking

Opener Adam Lyth lasted two balls until he wafted lazily at a Starc ball; Gary Ballance accumulated a lucky 23 before Johnson bowled him, exposing a total lack of footwork; Ian Bell was out second ball, missing a Hazlewood fast ball; and in-form batsman Joe Root managed just one run before he also played a lazy shot at Johnson and was caught behind by debutant Peter Nevill.

England pace bowler Stuart Broad was critical of the England top order, saying they seemed to have lost concentration after five sessions in the field.

"We needed to be right on the money when we came out to bat for that period, and we definitely weren't," he said.

England can still save the second Test, Broad said. "There's a lot of hope in the changing room."

Earlier, a career-best double century from Steve Smith powered Australia into a commanding position. Australia declared after playing just one over of the evening session, giving the tourists' bowlers a chance to attack England for about two hours.

Smith was eventually dismissed half an hour before tea for 215, attempting a reverse sweep against part-time spinner Root. He missed the ball and was leg before wicket, a decision confirmed after review.

Smith reached a career best when he passed 199. He started his career as a leg-spinning all-rounder, but has become one of the world's best batsmen. He has 10 centuries in his last 30 Tests.

Australia's imposing innings was built on a 284-run partnership between Smith and opener Chris Rogers, who hit 173.

England battled hard, taking six wickets, but the damage was done on the first day.