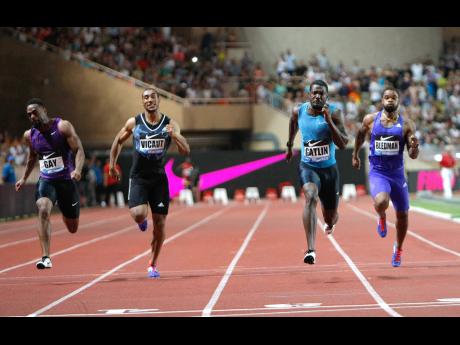 AP
American Justin Gatlin (second right) on his way to winning the men's 100m at the Herculis International Athletics Meeting in Monaco yesterday. Gatlin clocked 9.78 seconds. Tyson Gay (left), also of the United States, was second in 9.97 while France's Jimmy Vicaut (second left) was third in 10.03.

After posting his fourth 100 metres time below 9.80 seconds in five races this season, American Justin Gatlin dismissed suggestions that he has reached his ceiling in the event, and has set his sights on running faster at the IAAF World Championships in Beijing next month.

Gatlin yesterday clocked 9.78 seconds on his way to winning what should be his last race before competing in Beijing, beating a decent 100m field at the Monaco Diamond League with Tyson Gay, 9.97, and Jimmy Vicaut, 10.03, taking second and third, respectively.

It was Gatlin who, a day earlier, told journalists in the build-up to the meet that he had been told that he has made 9.7 seconds look boring in the 100m, while backing himself to test Usain Bolt's 9.58 seconds world record - something many backed him to do after he opened his season with a world leading and personal best 9.74 in Doha in May.

The sprinter has not gone faster since, twice going 9.75 before yesterday's run, but he feels there is more to come once he gets some rest and works out a few issues with his race.

"The good thing is that I have three weeks or so to rest and work on my race to ensure that I come back faster for Beijing," Gatlin said. "I haven't been keeping count, but hopefully, 9.7 will be my standard and I can now get some rest and come back and run even faster in Beijing, when it really matters."

"The lucky thing is that I can go home now and study all my races from the season and see where my flaws are and where I can get stronger and come out blazing in Beijing," added Gatlin, who also said that he was really happy to continue his dominance in the sprints over what was a solid set of sprinters in Monaco.

"It makes me feel really good to be able to go out there and dominate such a stellar field. There were a lot of very good guys out there," he noted, while brushing aside questions around his readiness to deal with the pressure of being the current best on the planet.

"I don't even look at pressure; it's just part of my nature right now," Gatlin said. "I'm just focused on going out there, lining up shoulder-to-shoulder with seven other guys, and all you can do is just go off the gun and run full speed. I just want to go out there, tune everything out, zone in on my lane and get through each round."