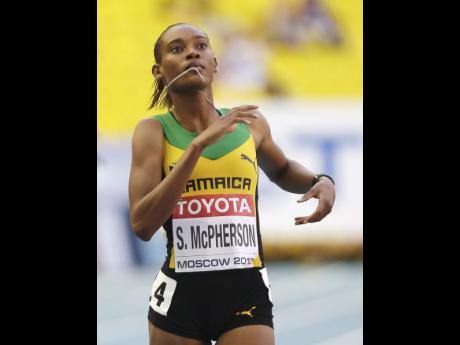 Commonwealth 400m champion Stephenie McPherson says she is satisfied with the progress she has made over the past few months after a strained hip and a subsequent hamstring injury forced a late start to her season.

Despite missing chunks of her background season and only really getting started in January this year, McPherson has not finished outside the top three of any of her races this season, with a season best of 50.40 so far.

However, the athlete, who actually ran her personal best 49.92 at this meet in 2013, is looking to dip below the 50-second mark in the coming weeks as she readies herself for a shot at the medal podium at next month's World Championships in Beijing.

"I am satisfied with this race and my season so far because I'm putting in some hard training because I missed out a lot because I started training late; about January or February, so overall the race wasn't bad," McPherson told The Gleaner shortly after her race.

"I strained my hip on the first day of training, and when I started training again in December, I hurt my hamstring. So my coach (Stephen Francis) and I are trying to make up for what I lost," said McPherson. "I think I'm in good shape right now though, but again, because of the heavy work load that I'm under right now, I wasn't expecting to go too fast today."

Back to her best

McPherson, who surprisingly finished third at the National Senior Championships a few weeks ago, is, however, confident that she will be able to return to her best in time for the World Championships, where she hopes to improve on her fourth-place finish two years ago in Moscow.

"It really showed at trials, I missed a lot of training, so the rounds really took a toll on me, but after missing so much and now consistently running 50 seconds, hopefully, by the end of this month going into next month, I can go under 50 seconds," she added.