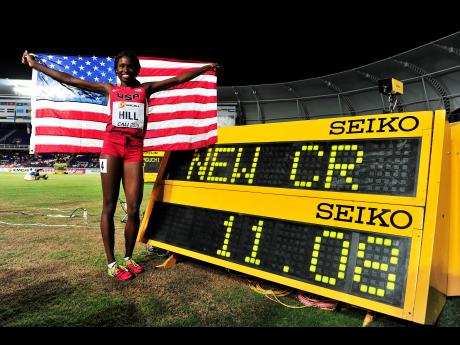 IAAF
Candace Hill of the USA celebrates with the American flag after winning the girls' 100 metres final in a championship record 11.08 seconds on day two of the IAAF World Youth Championships in Cali, Colombia.

CANDACE Hill broke down into tears minutes after winning the girl's 100m in a championship record 11.08 seconds at the International Association of Athletics Federations (IAAF) World Youth Championships, here on Thursday evening.

Tall and slender like a gazelle, she made an attractive picture as she walked around with the American flag draped across her shoulders, posing for photographs, smiling brilliantly, brimming with joy. She even spent a few minutes doing interviews with reporters, but as she began talking with American team reporter, Christa Mann, Hill broke down sobbing and could not speak for several minutes.

Little over a week before coming here, the 16-year-old had been named the US female national prep athlete of the year.

Hill, who said her goal is qualifying for the US Olympic team to Rio de Janeiro, Brazil next year, became the first high school girl to go below 11.00 seconds when she clocked a world junior record 10.98 seconds in the 100m at an invitational meeting in her home state of Georgia.

She told The Gleaner that winning here was the goal.

"It really means a lot to me as you can see I'm in tears because this is my goal coming in and I'm just glad I won gold for Team USA," she said.

Hill said she had to work very hard to get to her current level.

"It's been really, really great. The moment when my season started I was a bit out of shape but then my coach and I worked on it and then meet after meet I just got better and better so I ran personal-best times until I ran that 10.98 and that gave me confidence coming into this meet. So, this meet I just had to stay focused, do my job and win gold," Hill said.

"I look up to Allyson Felix because she's a nice runner and she stays humble and she's just amazing," Hill added.