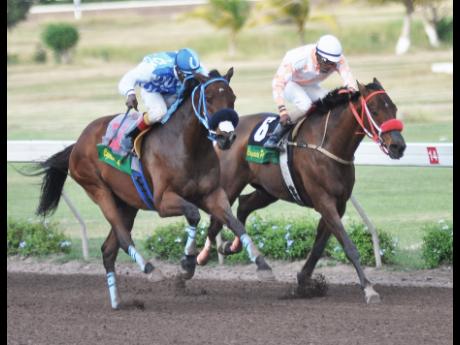 PRINCE ANDREW, twice a winner so far this season, seems poised to make it three when he runs in the three-year-old and up overnight allowance race over 1400 metres to be contested by 12 starters at Caymanas Park today.

Trained by Borris McIntosh, the six-year-old bay gelding by Dayton Flyer out of Quick Burst notched the first of his two wins over this trip in overnight company on January 24, beating RED FLAG in a driving finish in the fairly good time of 1:25.0.

He followed up over 1200 metres in claiming company with an easy win on March 21 and has proved highly competitive in three subsequent races since his return to overnight company.

He finished third to the disqualified RIO COBRE in a blanket finish over the straight (awarded second) on May 30 and last time out on July 8, beat all barring SCOOP JORYDNE from a bad draw in another fast-run straight five race.

All in all, PRINCE ANDREW has been the most consistent horse in the field and with leading all-time jockey Winston Griffiths retaining the ride, the hint should be taken.

PRINCE ANDREW seems best suited to this trip and looks the right choice from the handy mark of 54.0kg, despite the strong claims of seasoned overnight horses ROYAL VIBES and UNCLE TAF, both of whom finished heads on for second and third respectively behind FRANFIELD in the Ren Gonzalves Memorial Cup over 2000 metres on June 28.

Other firm fancies on the 11-race programme are SHE'S PLUMMY to repeat in the third race over 1400 metres, SIR BIGGS in division one of the Dr.l Clifford Grey Memorial Cup over 1300 metres, BUZZ NIGHMARE (working very wel) in the fifth, OUR CREATION In the ninth and EXPLOSIVE PRINCESS over BATTLE SONG in the final race.