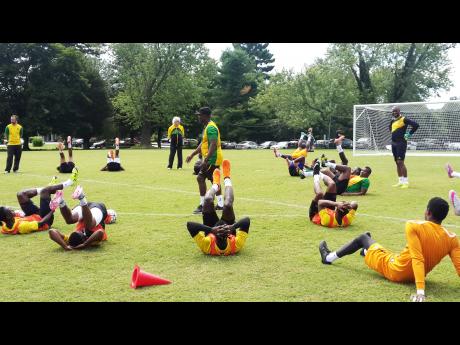 Contributed
Reggae Boyz stretching prior to training in Baltimore yesterday. 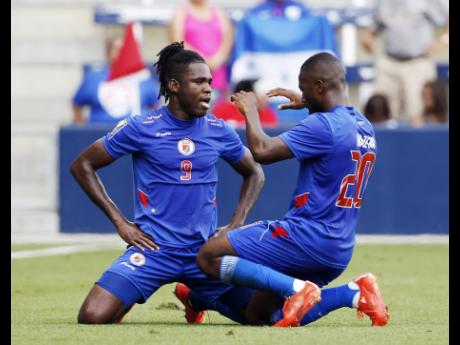 AP
Haiti's Kervens Belfort (9) is congratulated by Duckens Nazon (20) after his goal against Honduras during the first half of a CONCACAF Gold Cup match on Monday, July13 in Kansas City. Haiti won 1-0.
1
2

WITH as many as four, possibly five players missing from his original squad, Winfried Schäfer tinkered with the possibilities of first, a starting 11, then a formation, as he looked towards a knockout quarter-final match against Haiti in the CONCACAF Gold Cup at Baltimore Ravens' M&T Bank Stadium today, which kicks off at 8:05 p.m. (7:05 p.m. Jamaica time).

Injuries and suspensions through red and yellow cards have ransacked the German coach's plans ahead of what he deems a tough fixture in the opening round of the knockout phase, where all matches must end with a winner. So if the scores are tied after regulation time (90 minutes), then there will be extra time, and penalties, if necessary.

"We're looking for the first 11 players and the system that we play," he noted after another training session yesterday at Stevenson College.

Many of the injury and card problems occurred in the last Group B match they won 1-0 against El Salvador at BMO Field in Toronto, when Jamaica scored their second win. Goalkeeper Ryan Thompson and Michael Hector were early substitutions by the 22nd minute.

Players out of the action

Central defender Jermaine Taylor picked up a tournament-ending injury against El Salvador; goalkeeper Dwayne Miller got an injury and had to be substituted early, and hasn't had full training since; midfielder Je-Vaughn Watson, whose influence has grown by the minute, picked up his second yellow card to become ineligible; and striker Darren Mattocks was sent off.

All that was followed by Alvas Powell's desertion.

"Watson is out and he is a very important player in our midfield in defence and offence and we're looking which player can play his position," Schäfer noted. "Maybe Michael Hector can play, he plays this position in Scotland in the Premier League many times. Austin and Jobi McAnuff; Jobi can play any position, he's a phenomenal player, he says 'Coach, when you need me I'll play this position'."

He also spoke of his formation, saying: "After I watch the match Haiti-States (USA) again with my coaches tomorrow or this evening, I find out the solution for which system."

Regardless, Schäfer is not afraid. The team, which has played solidly to keep clean sheets in two of three matches and won as many, is steaming for the challenge.

"It's not a problem which player plays. Everybody knows everybody's very hot and everybody wants to win to go in the semi-final," he related.

"Our feeling, our spirit is very good. Tactically, the players have very good discipline on the field and all players not only want to go the limit, but over the limit in fighting," the 65-year-old German outlined.

Against Haiti, they have an outstanding series of results.

Dating back to the Gold Cup in 2003, the Reggae Boyz have never lost to their Caribbean neighbours.

In their last meeting, the Boyz won 2-0, at the Caribbean Cup in November, when first-half goals from Mattocks and Simon Dawkins made the result.

Dawkins remains a prospect to repeat his heroics, having played in tandem with Giles Barnes, Garath McCleary, McAnuff and captain Rodolph Austin, who have laid all their efforts on the table in Jamaica's earlier Gold Cup battles.

McCleary has been hot, especially with two goals and an assist for the 76th ranked Jamaicans. Haiti's ranks close, at 79th.

Schäfer said the year-end success that spiralled the Reggae Boyz to win the Caribbean Cup brings a psychological advantage.

"Yes," he replied to the query. "The players are confident. All players are very good (with) tactical discipline on the field.

"Haiti is very good. They bring three players from France second division," he also noted, of additions to their squad, after finishing second in Group A with four points.

The Haitians beat Honduras 2-1, drew 1-1 with Panama and lost 1-0 to the United States, which is coached by Schäfer's German compatriot, Jurgen Klinsmann.

"I talked to 'Klinsy' (Klinsmann)," he said, in reference to the US-Haiti clash. "This team played very well against the States (USA) and we've to concentrate from the first minute, and the bench, too."

They will number among Schäfer's options for a victory he thinks hinges as much on their strong defending.

Noting he did the same in the Caribbean Cup, Schäfer said: "I told my players here; the best defence wins a tournament.

"From the moment we lose the ball, everybody is a defender," he said.

The match will be preceded by a 5 p.m. (4 p.m. Jamaica time) showdown between Group A winners and tournament hosts, the United States and Cuba, the third-place qualifiers from Group C.