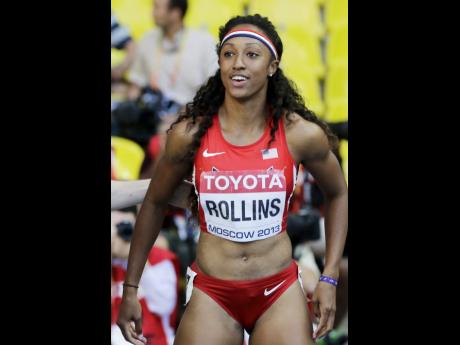 Five women have already ran faster than her this season, but defending 100m hurdles world champion Brianna Rollins is keeping the faith that her paced approach to the season will see her back on top of the podium at next month's IAAF World Championships in Beijing, China.

Rollins crossed the line in third place at the Monaco Diamond League behind winner Sharika Nelvis, 12.46, and Kendra Harrison, 12.52, but having posted her best time of the season so far, 12.56, perhaps she's onto something, as she explained her strategy heading into Beijing.

"At the beginning of the season, my coach and I were trying to take it slow, so I would be able to do well when it matters - at the World Championships," Rollins told The Gleaner. "I don't want to be running too fast too early considering that I have to run in late August. So right now, it's all about having faith and staying focused."

Rollins, whose win in Moscow two years ago came as a surprise to many, is well aware that she will arrive in the Chinese city with a target on her back this time around. She insists, however, that she is not bothered by the added weight of expectation and is focused on trusting the process as she looks to become the first athlete since Michelle Perry (2005 and 2007), and only the third after Gail Devers (1993 and 1995), and Perry, to win back-to-back world titles in the 100m hurdles.

"Honestly, I don't worry about the expectations of anyone, I just try to stay focused, keep my faith strong and continue to let God's will be done. "I'm confident that I will be back on top of the podium at the World Championships in Beijing," added Rollins.

Rollins' only win this season came in her previous race in Luzern, Switzerland, where she won in 12.66 seconds.