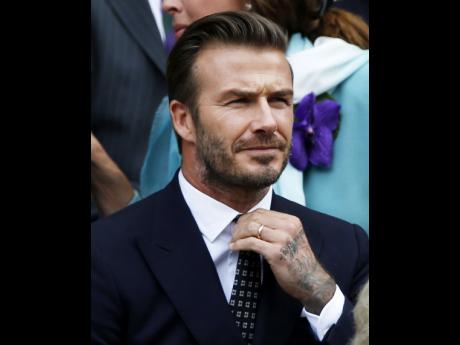 David Beckham and his partners are inching ahead with plans to build a soccer stadium next to Marlins Park.

The Miami Herald reports that Mayor Tomas Regalado said yesterday that he would seek approval from the city commission to begin negotiations on how Miami could provide the land for the privately financed stadium. The stadium would house an expansion Major League Soccer team that would be owned by Beckham's group.

The retired English star and his partners remain in talks with the University of Miami about possibly relocating the Hurricanes' football team to the stadium. If that happens, the stadium would grow from 25,000 seats to 40,000. The estimated cost is up to $250 million.

Marlins Park is in Little Havana, just west of downtown.

India beat Zimbabwe by 54 runs in the first Twenty20 yesterday to need one more win for a complete sweep on the limited-overs tour.

India, who won the one-day series 3-0, posted 178-5 batting first at Harare Sports Club with contributions from stand-in captain Ajinkya Rahane (33), fellow opener Murali Vijay (34), and 39 not out from Robin Uthappa.

Seamer Chris Mpofu took 3-33 after being called into Zimbabwe, the only bowler to have an impact.

Hamilton Masakadza (28) and Chamu Chibhabha (23) combined for a 55-run opening stand for Zimbabwe in the chase, but recalled off-spinner Harbhajan Singh removed Chibhabha and Charles Coventry, and Zimbabwe struggled after suddenly being 82-5.

The second T20, the final game of the tour, will be played tomorrow.