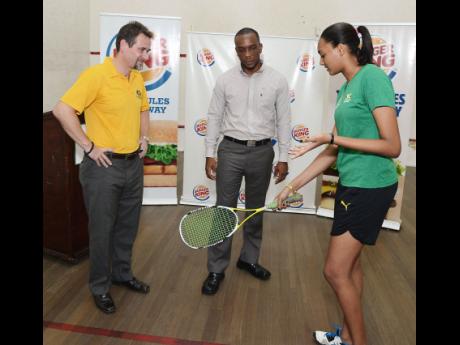 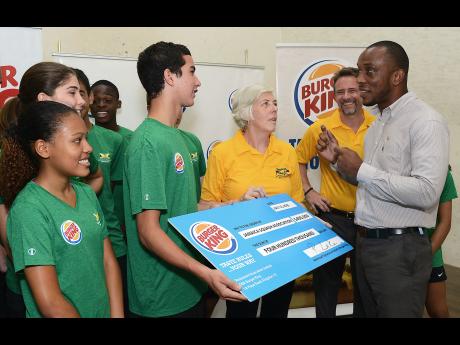 Ian Allen
Nicholas Mundell (right) brand manager, sponsorships and fixed advertising, Burger King, presents the company's sponsorship cheque to Jake Mahfood (second left) captain of the Jamaica Junior Squash team and Jill Binnie (centre), manager of the Jamaica Junior Squash team while other members of the team look on. At second right is Chris Hind, president of the Jamaica Squash Association. Occasion was a sponsorship announcement and the introduction of the team to the 2015 Caribbean Area Squash Association's Junior Championships. The presentation was made at the Liguanea Club in New Kingston on Thursday. 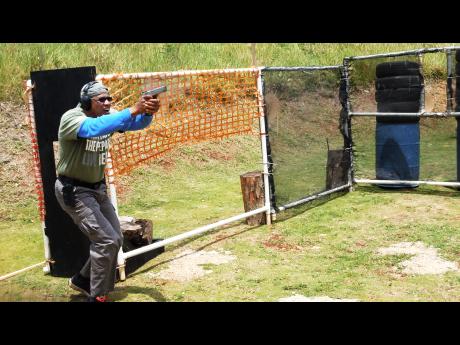 The second round of the Jamaica Broilers/Western Sports 50-over Cricket League is on tomorrow with four matches scheduled.

Defending champions Jamalco will oppose Jamaica National at Jamalco in Clarendon, Yohan Blake Foundation vs NWC at UWI Bowl, Jamaica Broilers vs Department of Corrections at Spring Village in St Catherine and Continental Baking Company vs Red Stripe at Mico, all matches starting at 10 a.m. National Housing Trust has drawn a bye in this round.

The competition, which started later than usual this year, saw cup holders Jamalco opening the season on a winning note last Sunday.

Metrodade then slammed another former Division One champion, Scotiabank, 6-1, thanks to a hat-trick from Lawrence. Hodges scored a double. They also drubbed UWI 8-1.

In another Division One match played last Sunday, former champions The Gleaner clipped Norman Manley International Airport 1-0, courtesy of a 83rd-minute goal from Fabian Nethersole, his fourth goal of the season.

Prior to this match, The Gleaner were coming off back-to-back losses to GraceKennedy and Carib Cement. Despite this, the 'Newsmen' are lying second in the standings with 12 points from six matches, just behind the unbeaten Metrodade on top with 13 points from five matches

In Division Two, Pete's Bottling lead with 14 points from six matches, the same as Sagicor, who have an inferior goal average. Appliance Traders and Sutherland Global both have nine points from five matches; Transport Authority, eight from five; and Xerox and JUTC, both with eight from six.

Metrodade Security, unbeaten in the Business House Division One League, were beaten 2-1 by NWC in the second round of the Scotiabank KO competition earlier this week, as the defending league champions lost for the first time this season.

The KO competition continues today with Scotiabank vs Transport Authority at Winchester Park, NHT vs Guardsman at Alpha, and ATL vs Xerox at Waterhouse. All matches start at 3:30 p.m.

The Gleaner rebounded from back-to-back losses against National Housing Trust and Guardsman to win consecutive matches in the 3-on-3 Business House Basketball Competition (Division One) on Monday and Wednesday at the Stadium Courts.

On Monday, The Gleaner clipped Seprod 38-37, thanks to a game-high 23 points from captain Omar Wolfe, supported by nine points from Theo Johnson.

Then, on Wednesday, The Gleaner defeated VMBS 23-21, with Wolfe again leading the way with good support from Keneil Allen.

The 2015 edition of the Milo-sponsored Portmore Cricket Association (PCA) Under-17 Cricket League bowls off tomorrow at two venues in Portmore.

The six teams are playing for the Milo Challenge Cup. NestlÈ Jamaica, under its Milo brand, are the main sponsors.

Power of Faith are currently on three points, and a win will see them joining both Faith Temple and defending champions 65 Waltham Park Road New Testament on six points apiece. Goal difference will decide which two teams will go to the semi-finals.

Zone Two is already decided as Equator Faith Mission (six points), and PFM 'A' (three points) are safely through to the next round.

In games last Saturday, PFM 'A' defeated Hope and Mercy Ministries 25-15. Debbie-Ann Coghiel shot 12 goals from 19 attempts and Melony Bailey 13 from 17 for PFM 'A', while Chavel Brown scored nine of 12, and Gizelle Allison six from 10 for Hope and Mercy, respectively.

Racing United went on a goal-scoring spree as they clobbered Westport 8-1 in a lopsided Zone B game in the Pines Imaging Centre-sponsored Portmore Under-17 Football League match at the Racing Oval in Gregory Park last Sunday.

It was their first win of the season, after they drew their opening game 1-1 with Caymanas Gardens the week before.

Defending champions 65 Waltham Park New Testament will hunt their second win in as many matches as they take on Faith Temple Pentecostal in the second match of a triple-header in the Power of Faith Ministries Church Football League at the Passagefort playing field today. Match time 1:30 p.m.

In the opening game at the venue at 11:30 a.m., Hope and Mercy Ministries take on Lighthouse Assembly.

In the third game at 3:20 p.m., Power of Faith face Greater Portmore.

NestlÈ Jamaica, under its Milo brand, has partnered with the Portmore Cricket Association (PCA), to conduct a cricket clinic at the Waterford High School grounds today. Activities get under way this morning at 9:30.

More than 100 young cricketers are expected to attend the one-day event.

Charles Simpson, the founding president of the Portmore Metropolitan Cricket League, said the clinic is geared at developing young cricketers as they prepare to play for their respective clubs in this year's PCA Milo Under-17 Cricket League. The guest speaker is Billy Heaven, president of the Jamaica Cricket Association.

Clarendon and St Catherine have extended their leads in the South Central Confed Under-13 and Under-15 youth football leagues with two rounds remaining. Clarendon head the Under-13 competition after four rounds with 10 points. Manchester are next with seven points, followed by St Catherine, five.

St Catherine lead the charge in the Under-15s with 10 points, followed by Manchester on six, St Elizabeth on four, and Clarendon on one.

In midweek matches, St Catherine played Clarendon at the Prison Oval, while Manchester opposed St Elizabeth at Kirkvine. The Under-13 challenge between St Catherine and Clarendon ended 0-0. However,

Manchester brushed aside St Elizabeth 3-0 in the Under-13s. However, the Under-15 clash ended 0-0.

Central United recorded the only win from last weekend's play in the Top Notch Football League played at the Sunset playing field in central Manchester. They defeated Power Strikers 2-0.

In other matches played on the day, Knockpatrick FC defeated Central 3-2, while the defending champions Albion FC suffered a 2-1 loss to Mandeville United. This result means the champions are in danger of not making the second-round cut as they only have one point so far.

Both the Juici Patties-sponsored Clarendon Netball Association Junior and Senior Open leagues will close tomorrow with the playing of the finals at the sponsor's headquarters at Clarendon Park. Previous rounds were played at the Mineral Heights Sports Centre.

The day's activities will begin at 11 a.m., with a closing rally featuring all the teams which did not make it to the semi-finals.

The Junior final is scheduled for 3 p.m. between Denbigh High and Knox High. The Senior final is set for 4 p.m., with defending champions Jamalco against Hayes Contenders. A presentation ceremony will be held after the final match.

warm-up challenge match ahead of the upcoming international match to be hosted jointly by the Jamaica Rifle Association and the Woodleigh Shooting range in Clarendon on July 25 and 26.

The match was hosted by the Manchester Rifle and Pistol Club (MRPC) last weekend at the Lincoln range.

Henriques earned 715 points from eight stages to hold off the challenge of a resurgent Ellsworth Dixon who finished at 87 per cent, the highest second-place acquisition since the start of the year. Owen Campbell was third with 77 per cent, mining 555 points, with female shooter Sue Ann Henriques (76 per cent) and Thomas Jones (75) rounding off the top five. Sixth-place Evan Grant also notched 75 per cent.

Early indications are that the MRPC will field at least 10 local pros for the upcoming match. Hence, another practice shoot is also planned at the Lincoln range tomorrow.

Goalshooter Tracey-Ann Francis was the star for the winners, as she scored 30 of her team's 32 goals.