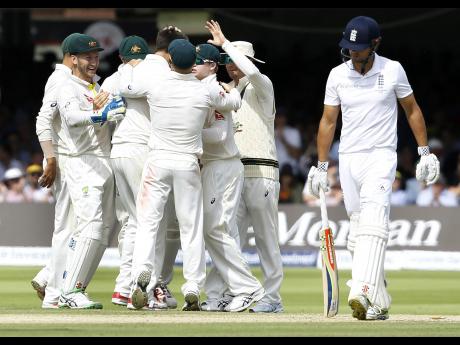 AP
Australia players celebrate as England's Alastair Cook (right) leaves the pitch after he was bowled by Mitchell Marsh on the third day of the second Ashes Test match between England and Australia, at Lord's. 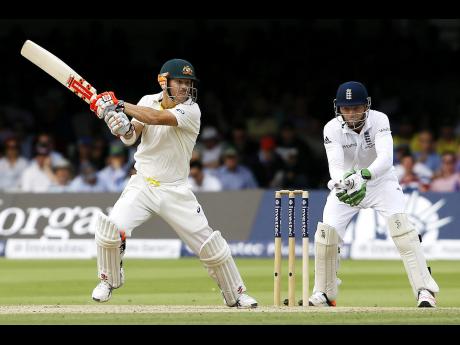 AP
Australia's David Warner plays a shot off the bowling of England's Moeen Ali on yesterday's third day of the second Ashes Test match between England and Australia, at Lord's cricket ground in London. At the close, Warner was unbeaten on 60. The wicketkeeper is Josh Buttler.
1
2

Australia exerted total domination over England on day three of the second Ashes Test yesterday, building a huge lead by refusing to enforce the follow-on despite being 254 runs ahead after the first innings.

At the close, Australia was 108 for no wicket, an overall lead of 362 with two days still to play.

England were dismissed for 312 in reply to Australia's imposing first-innings score of 566-8 declared yesterday.

Australia could have asked England to bat again but instead opted to bat for a second time and have England bat last, chasing a big total.

Openers David Warner and Chris Rogers made batting look easy on a placid wicket and against a demoralised England attack. At the close, Warner was on 60 and Rogers on 44.

Australia captain Michael Clark is likely to bat until around lunchtime today and set England an unlikely 500 over five sessions.

While Australia bowled well, England's batsmen were often the cause of their own downfall. Several of them displayed technical deficiencies that will worry new coach Trevor Bayliss, the Australian briefed to try to regain the Ashes for England.

Victory for the tourists at Lord's would level the series 1-1, with three Tests to play.

Rogers scored 173 in the first innings, with Steve Smith scoring 215 before Australia blew away England's top order on Friday evening, leaving the hosts on 85-4 at the close of day two.

Yesterday, England put on a slightly better show, but only captain Alastair Cook and allrounder Ben Stokes were able to stick around. Cook was dismissed four runs short of his century and Stokes scored 87 as several England batsman displayed frailties against the aggressive and disciplined Australian pace attack.

Stokes said England tried to play positively but will need to bat for about 150 overs in the second innings. "We're under the pump, tomorrow's a big day for us," he said. "It's pretty much over to the batters for the next two days."

Cook and Stokes shared a partnership of 145, but Australia's bowlers remained patient and grabbed the crucial wickets of Stokes just before lunch and then Cook shortly before tea - just short of what would have been his 50th first-class century.

Mitchell Johnson was the pick of the Australian bowlers, with 3-53 from 20.1 overs.

"We'll obviously want a few more runs (before declaring)," Hazlewood told reporters. "We're getting them pretty quickly at the moment, so hopefully, that keeps up tomorrow. I think we'll need a little bit of time to bowl these guys out on a pretty flat wicket.

"Batting first was key and we did the job with the ball yesterday and today. So we're in a pretty good position."

Cook was batting impressively and looking increasingly assured when he attempted to drive a wide delivery from Mitchell Marsh. The England captain was deceived by the pace and got a thick inside edge on to his stumps with the score on 266.

He batted for 233 balls and nine minutes short of six hours, hitting 13 fours.