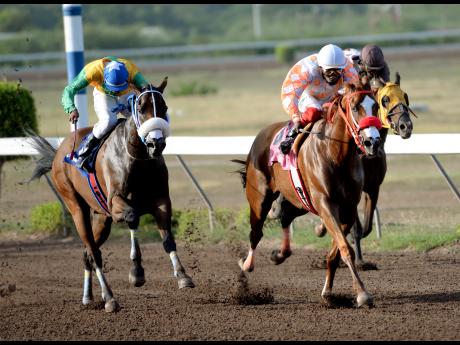 UNCLE TAF, a beaten favourite in his two previous races, rebound with a fighting victory in the 3-y-o and up overnight allowance race over 1400 metres at Caymanas Park yesterday. He, however, had to survive a steward's inquiry.

Ridden by former champion jockey Wesley 'Callaloo' Henry for trainer and part-owner Solomon Sharpe, UNCLE TAF was early in the lead on the outside in a field of 10. Chased by the highly fancied PRINCE ANDREW with Winston Griffiths, the consistent 5-y-o gelding responded to a strong ride from Henry from in the final 150 metres to hold PRINCE ANDREW at bay.

The stewards were forced to take a look at the stretch duel as UNCLE TAF made it uncomfortable for PRINCE ANDREW when stepping out a bit at a crucial stage, but the result was allowed to stand.

This was UNCLE TAF'S first win from seven starts this season and his seventh from 31 starts lifetime with total stakes of $8.7 million.

Meanwhile, Henry, who resumed riding at Caymanas Park on July 11 following a three-year stint on the North American circuit, had a second winner on the card in another front runner, SPEEDY PROCESS, (5-1) for trainer Donovan Plummer in the third race over 1300 metres.

In-form apprentice Shamaree Muir also notched two winners - BLUE BOMBER BOY, a 6-5 favourite in the second race, and front-running SEEKING HOPE , an even-money favourite, in division one of the Dr. Clifford Grey Memorial Cup over 1300 metres. Division II of the 3-y-o maiden race was won by the evens favourite NASDAQ PRINCESS in a very pedestrian time (1.25.0) compared to 1.21.3 recorded by the lightly raced colt SEEKING HOPE.

The day's major upset was recorded by the 64-1 outsider THE REAL RHYTHM in the eighth race over a mile for conditional $180,000 claimers. Running on strongly a furlong out, the six-year-old mare was ridden by the sparingly used jockey, Rudolph Paige, for trainer Anthony Ferguson.