Jamaica's medal tally remains at one 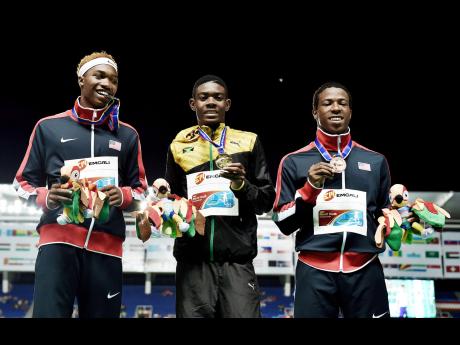 JAMAICA'S medal tally remained at one after yesterday's penultimate evening of competition at the 2015 International Association of Athletics Federations World Youth Championships at the Pascual Guerrero Stadium, here.

Junelle Bromfield and Jauavney James failed to medal in the 400m hurdles. Lushane Wilson was sixth in the high jump final with a best of 2.11m. Italy's Stefano Sottile, 2.20m, won the gold medal.

Bromfield finished seventh in the Girl's 400m hurdles after an inconsistent race in which she started slowly, picked up the pace, and then faded again in the final 100m to 58.49.

The United States' Sydney McLaughlin won in a championship record 55.94 ahead of Canada's Xahria Santiago, 56.79, and Brandee Johnson of the USA 57.47.

James was disqualified in the boys' final after a lane violation. The event was won by American Norman Grimes in World Youth leading 49.11.

Jamaica will have its last chance to add to its lone medal when the championships wrap up this evening.

Shaneil English is through to the final of the Girl's 200m as one of the fastest losers after a fourth-place finish in semi-final three.

English, who later complained of being tired, struggled to the line in 24.07 seconds in the semi-final, won in a personal best 23.03 by Lauren Rain Williams of the United States.

Shellece Clark failed to advance from semi-final one after finishing last in a slow 24.72 seconds.

Reigning 100m champion Candace Hill of the United States had to endure a long delay in semi-final two after a technical fault caused two false starts. When the race was run, the American sprinted out of the blocks and led to the finish to win in 23.21, ahead of Nicole De Bruyn of South Africa in a personal best 23.54, and Ashlan Best of Canada 24.22.

English will run from lane one of the final today.

She said: "I just have to go back to the drawing board for tomorrow. I'm going to go out there and compete."

Xavier Angus did not advance from the Boys' 200m semi-finals. Although he put on a battling performance, Angus could only manage fifth in semi-final two in 21.58. The event was won by Josephus Lyles of the USA in a personal best 20.93.

Jamaica's 4x400m team failed to advance past the qualifying stage of the mixed-gender event as the quartet of Michael Bentley, Anthony Carpenter, Juniel Moore, and Satanya Wright, in that order, ended fifth in heat three in 3:28.71.

Tissanna Hickling also did not qualify for the final of the girl's long jump. She had a best leap of 5.85 metres.