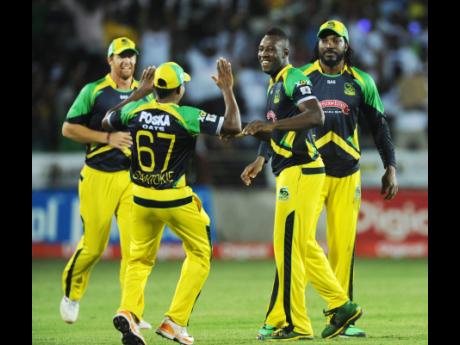 Ricardo Makyn
Jamaica Tallawahs players (from left) Rusty Theron, Krishmar Santokie, André Russell and Chris Gayle celebrate the fall of a wicket. The action is from the Tallawahs versus Trinidad and Tobago Red Steel Caribbean Premier League match at Sabina Park on July 9. 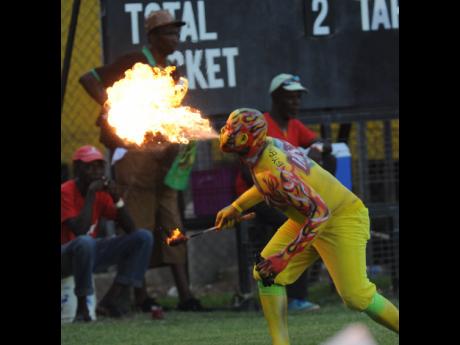 Many times I have pondered why the Caribbean Premier League is so popular, and each time I end up with the same answer.

The attraction is not about cricket: it is about entertainment, about music and dancing girls, fire-eaters and flashing lights.

It is about fun, it is about a "fan" of the Jamaica Tallawahs dancing and vigorously waving the Black, Green, and Gold, after Kieron Pollard of the Barbados Tridents had just smashed a Tallawahs bowler for a couple of sixes, the ball disappearing in the night sky.

Whenever I remember the things about cricket which I love, the contest between bat and ball, the skill, the drama, the excitement, the battle to win, the fight to draw if you cannot win, the intricacies of the game, and the unpredictable nature of it all, I cannot, like most true cricketers, or any fans of cricket, love the hit-or-miss nature of T20 cricket.

I love to see the ball whistle to the boundary, or sail over it, but that is only a part of the game. I prefer, for example, when the stroke for six is the result of a well-judged stroke, a stroke of intent, and a stroke of class, like a Lawrence Rowe production.

I do not enjoy it, to the point that I cannot celebrate it with a rousing handclap whenever a batsman swings his arms, aiming to long-off or to long-on, and edges the ball pass the vacant slip or perilously close to the leg stump for a boundary.

It is a part of the game, but it is not the part I go to see, or the fan goes to see. The fan pays his hard-earned money to see a well-executed stroke, a good delivery, or a brilliant catch, something which really excites him, especially when it is done by one of his own.

Whether the edged stroke goes for a single, a four, or a six, I just cannot applaud, much more appreciate, the batsman strolling down the pitch and touching glove in satisfaction, if not in glee, with the other batsman after the stroke. I also cannot appreciate the crowd jumping around in total happiness, and I cannot listen to the flowery and elaborate description of the stroke by commentators.

At such times, I remember the greatness and the composure of batsmen such as Garry Sobers and Rohan Kanhai, Rowe and Alvin Kallicharran, Viv Richards and Brian Lara and many, many others who showed what batting was all about, or should be all about.

And although the fielding is great and something to see, even when the simplest of catches becomes a "fantastic" catch, the bowling, most times, is nothing but cannon-fodder for the batsmen. The bowlers, most times, seem to be there only for the batsmen's pleasure, to serve up the ball which the batsmen promptly launch over the boundary.

Most of all, I love Twenty20 cricket for what it is: a shortened version of the game which, with its ability to produce sixes after sixes, quick singles, and fantastic and acrobatic fielding, attracts young people, older people, and all kinds of people to the game.

Each time I ponder the popularity of the CPLT20, however, I still wonder the reason why.

Cricket is cricket, and everyone does not necessarily have to enjoy it. It is, or should be, played by those who love what it has to offer, people should watch it because they enjoy watching it, and apart from adding a little to spice it up, it should remain a sport for those who enjoy it.

Other sports offer different things for people to enjoy. Enjoyment should not be all about money, or about crowds.

Money, however, the same money, is needed by the clubs, schools, and territories, and it is needed, not to pay musicians, dancing girls, fire-eaters, and the franchise owners, but to maintain the grounds all year long, to pay for the lights, to pay the umpires, to provide bats and balls, lunches and teas so that the game, all three versions, can go on, can survive.

The franchise system is all about entertainment, making money, and nothing else. Cricket is about playing cricket all the time, all three versions of the game, all the time and by everyone, and lifting the standard of the game.

T20 cricket is undoubtedly popular, and God's willing, hopefully, it will always remain so. Test cricket, however, is the format by which a good player is judged, and that will be so for a long, long time to come, even if those who do not love cricket, in any of its forms, follow the franchise-based CPLT20 everywhere and anywhere they go.

The schools, the clubs, and the territories, God's willing, will always find the money to keep cricket going - to keep Test cricket alive.