US grandmasters confirmed for Jamaica Cup 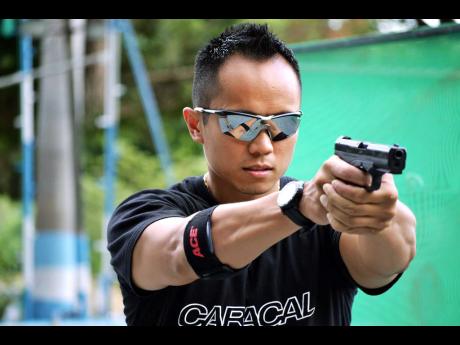 The United States duo joins an exciting line-up of local and regional shooters for the 16-stage, 300-round shoot, which opens at the Jamaica Rifle Association's Mountain View range on Saturday and concludes at Woodleigh, May Pen, on Sunday.

Racaza, who placed third on Season One of 'Top Shot', will shoot Production Division, along with Hobdell, going up against Master Class entrants from Ecuador.

Jamaica's Super Senior veteran Anthony 'TJ' Johnson has decided to step down from his usual Open Division, which features no-holds-barred weapons, to match skills with the foreigners, using out-of-the-box pistols.

Production Division enables any legal firearm holder to participate in the sport of practical shooting without having to purchase expensive equipment.

Wilson was impressive in his practice session win at last weekend's Monster Match at Mountain View, serving notice on defending Open champion Murdock, who has himself been razor sharp, racking victories in the USA and Caribbean.

High-flying Lennie 'Aggressive' Moulton was recently promoted to 'A' Class after posting victories at the Jamaica Invitational Pistol Tournament, Caribbean Cup in Aruba, Mississippi Classic and Double Tap in Texas. He will be bent on adding another Open win to his impressive run and can expect challenges from Duane Samuels and ever-improving David McMorris.

The buzz in Standard Division will come from masters Andrew 'Wasp' Yap and consistent Orville 'Reds' Henriques. Both have been shooting on the local and international circuit, with Yap scoring ahead of Henriques in their last encounter at the Texas Double Tap last month.

However, surprises could spring from a talented Limited Division cast of locals, which includes Ellsworth Dixon, Thomas Jones, Owen Campbell, and Evan Grant. Chris Hart has stepped outside his comfort zone of Production Division to spice up the competition in Limited Division.

First shot goes off at 8:30 each morning.