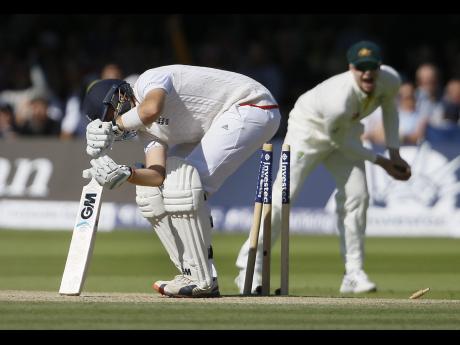 AP
England's Joe Root is bowled by Australia's Josh Hazlewood on the fourth day of the second Ashes Test match between England and Australia, at Lord's cricket ground in London yesterday.

Australia dealt England a humiliating Ashes defeat at Lord's yesterday, winning by 405 runs to level the five-match series and deliver a wounding defeat from which England may struggle to recover.

The match ended more than a day early after Australia dominated every session since Thursday's start to crush England.

"Full credit to Australia," said England captain Alastair Cook. "They got on top of us on the first day and never let us up again."

First, Australia batted and amassed 566-8 declared thanks to major innings from Chris Rogers and a double century from Steve Smith, and then bowled England out for 312.

The tourists declared just before lunch yesterday after a quickfire 254-2 in their second innings to set England a massive 509 runs to win.

It was clear England would struggle, but the team collapsed in ignominious fashion to 103 all out as Australia's rampant bowling attack exposed serious flaws in England's batting.

"It's not good enough, just not acceptable," Cook said. "We have been totally outplayed for four days."

The series is now level 1-1 with three matches to play.

Australia captain Michael Clarke, under fire after the

first Test defeat in Cardiff, paid tribute to the attitude shown by his players, especially Rogers and Smith. "Credit to those two, they turned it around for us," Clarke said.

And he made special mention of the bowler who is fast becoming England's bogeyman: "Mitchell (Johnson) is a great weapon to have in your team."

Johnson was the standout Australia bowler, taking three wickets in each innings with his fierce, short-pitched left-arm deliveries.

Set a massive 509 runs to win, England were 64-5 at tea, and staring at defeat after caving in.

The 169-run victory in Cardiff looks a long time ago now to England.

Both of England's openers were back in the pavilion within half an hour of lunch and Cook hinted at changes in the misfiring top order.

"It's certainly something we'll be looking at in the next couple of days," he said.