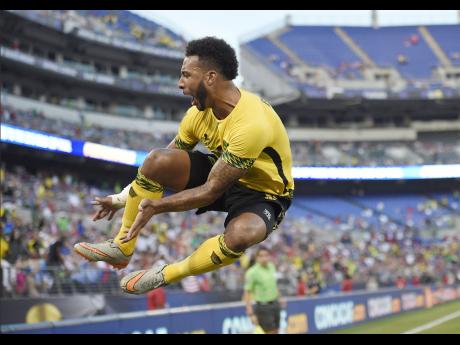 AP
Jamaica's forward Giles Barnes celebrates his goal during the first half of the CONCACAF Gold Cup quarter-final match against Haiti at the weekend in Baltimore.

GILES BARNES and his Jamaica senior men's national teammates are on a high at the CONCACAF Gold Cup.

"Going into the semi-final with this team, with my brothers, it's the stuff dreams are made of," the Reggae Boyz centre forward said following their 1-0 win over Haiti at M&T Bank Stadium on Saturday night. And they aren't done yet.

"Getting to that final, which we think we're capable of, is going to take us to a new level, so, at the moment, I'm a little bit on cloud nine. I'm proud of my team, proud of my country and, hopefully, the dream continues," he added.

Barnes scored the winning goal at the seventh minute, taking a pass from Adrian Mariappa, then turning to hit an angled shot that deflected off the leg of Haitian keeper Johnny Placide before going in. It was his first goal of the tournament, but as he had been saying all along, all that matters is contributing to the team's overall effort.

"I don't care who scores, as long as we're in the semi-final, final, and lifting the cup. Obviously, to score and get on the scoresheet, that's what my game had been missing. I've had a pretty good tournament holding the ball up, settling the guys in and working hard, so it was kind of a little bit of reward for me after doing all the dirty work," he admitted.

"They're a good team. They moved the ball well; they've got athletic people throughout their squad. But we're a good side and we've come out and shown everybody what we're capable of. We're so proud of each other right now and we want to make the whole country proud by getting into the final."

The Jamaicans were due to leave Baltimore last night for Atlanta, where they will tackle the United in the semi-final on Wednesday. The United States made a domino scoreline as they toppled Cuba 6-0 in the opening quarter-final of Saturday's double-header, with Clint Dempsey netting a hat-trick.

The 26-year-old Barnes, who plays football for Houston Dynamo in North America's Major League Soccer and is familiar with a number of the US players who also play in the same league, says team unity will be key to overcoming the Americans.

"So as long as we're all pulling in the same direction, giving the same work rate out there, the same energy, the same performance, we'll be fine," Barnes said.