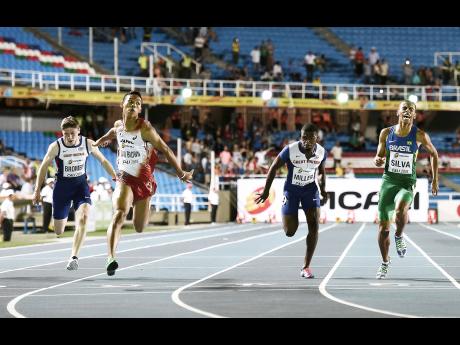 Haruka Kitaguchi won the girl's javelin throw with a personal-best distance of 60.35 metres; Ryusei Fujii and Masaki Toyoda finished second and third, respectively, in the boys' 400m hurdles in personal-best times of 50.33 and 50.53 seconds, respectively.

Team coach, Kazuhiko Yamazaki, speaking through interpreter Ellie Kawai, told The Gleaner that the system in Japan allows for athletes to train while in school, and not only in private clubs as in many other countries.

"In Japanese high schools, there is an after-school club that does athletics, and it's a really good system.

"Brown and Kitaguchi are in a programme known as the Diamond Programme, which is separate to everything else, so they go abroad and get special training. Other athletes are selected from the national high-school championships," he added.

Additionally, the government increased its funding of sport after the country's capital, Tokyo, was awarded the right to host the 2020 Olympic Games.

"We've had this elite programme for a long time, but because we have the Olympics, we have lots of new programmes, so perhaps that's why we are getting stronger. We've got more funding as well."

Yamazaki, who is a former athlete himself, specialised in the 400m hurdles and finished seventh in the event at the 1995 World Championships. He won the event at the University Games in 1995 and the East Asian Games in 1996. He also competed in the summer Olympic Games in Barcelona 1992, Atlanta 1996, and Sydney 2000.

He said the silver and bronze medals won by Fujii and Toyoda were special. Brown's father is from Ghana.