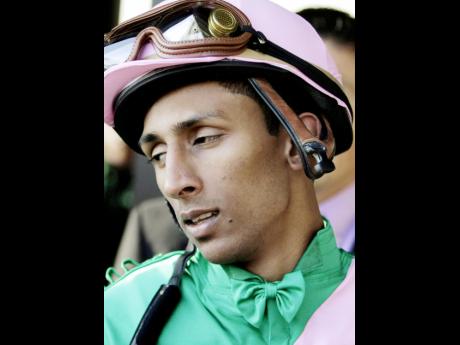 The Soca Warriors lost 6-5 on penalties at MetLife Stadium here after the game was locked 1-1 after full-time and added extra-time on Sunday.

"I think fatigue was a big factor. We could not get up and down the field as a unit like we did against Mexico and as the game went further and further forward we just couldn't keep possession of the ball. We ran out of legs," Hart said following the game.

The Caribbean side then travelled to Jersey for Sunday's game while Panama, who played their last game last Monday, had the extra time off.

HEMPSTEAD, New York, CMC - Jamaican jockey Rajiv Maragh has been released from hospital but no timelines have been set for his return to racing, after he suffered several injuries during a fall at Belmont Park ten days ago.

The 30-year-old went down in race five on the July 10 card when his mount, Yourcreditisgood, clipped heels with Mini Muffin, and fell heavily. Maragh fractured several vertebrae in his back, picked up a broken rib and suffered a small lung puncture.

Doctors have ruled out surgery but Maragh is expected to spend most of his time resting as he tries to recover from his second fall in 11 months at the Elmont racing oval.

PORT OF SPAIN, Trinidad, CMC - Trinidad and Tobago Red Steel posted their third win on the trot with a seven-run victory over Jamaica Tallawahs, as they continued their late surge in the Caribbean Premier League here Sunday.

Opting to bat first at Queen's Park Oval, they managed only 145 for three off their 20 overs, with South African Jacques Kallis top-scoring with an unbeaten 61 of 51 deliveries and captain Dwayne Bravo getting 49 not out off 30 balls.

They then successfully defended their total, restricting Tallawahs to 138 for nine, thanks mainly to leg-spinner Samuel Badree's three for 35 and two wickets apiece from medium pacer Dwayne Bravo (2-18) and left-arm spinner Sulieman Benn (2-28)

Andre Russell gave Tallawahs hope with an aggressive 36 from 22 balls while opener Chris Gayle hit 27 from 13 deliveries but no other batsman passed 12.