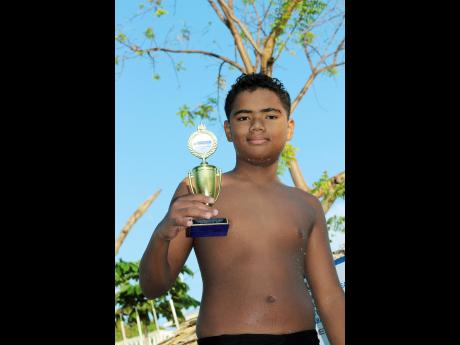 Jamaica has produced several good swimmers over the years, and it would appear that the production line is again being revved up to throw up another potential star in 11-year-old Rin Giles from Mt Alvernia Prep School.

The swimming sensation has been creating waves in the pool with a total of 16 medals won in the 2014-15 season, including two records, the first coming at the Mayberry Investments Prep/Primary School Swim Meet in April.

There, Giles smashed the 50m backstroke record, posting a fresh time of 37.25 seconds in the 11-12 age-group section. It was his best time in the event. That record would fall, however, as he finished strong to take gold at the NestlÈ Jamaica Limited Prep/Primary School Swim Championship.

His 36.75 seconds demo-lished the record he set at the Mayberry meet and helped to catapult him into the hearts and minds of those who witnessed the feat.

His personal coach, Joshua Bailey of the Blue Marlin Swim Club, out of Montego Bay, thinks he has a good chance of making the 2016 Carifta team.

"He has so much potential and he really is a strong swimmer. His records and overall performances tell the story that he is one to watch out for," said Bailey.

"Carifta is not a dream anymore for Giles. He clearly has the potential to do well and, if he continues doing so, then he could be in line if the qualification times are met," added Bailey.

Giles helped his school to a 13th-place finish at the Amateur Swimming Associa-tion of Jamaica (ASAJ) swim meet back in November of last year, taking gold in the 50m backstroke, and returned to again land gold in the 50m butterfly. He grabbed silver in the 50m breaststroke and 200 IM (individual medley).

He backed up that performance with his record swim at Mayberry meet and has not looked back since, posting wins also at the Burger King/YMCA Prep/Primary School Swim Challenge, where he helped Mt Alvernia to a fourth-place finish in May, taking the gold in the 50m freestyle and backstroke, before settling for silver in the 50m breaststroke and backstroke.

"As a young swimmer, he will need the support of his parents, and we at Blue Marlin are very happy that he has been getting that. His mother gives amazing support and he relishes that, plus, we make sure that he remains focused in academics as well as in the pool," the club's head coach, Rosemarie Logan, said.