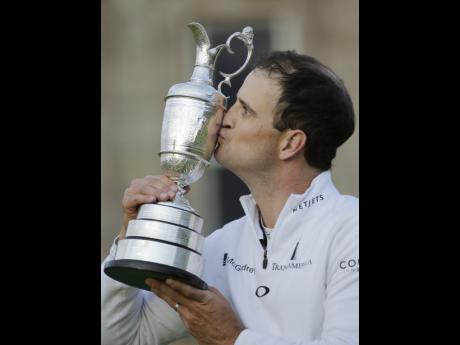 AP
American Zach Johnson kisses the trophy as he poses for photographers after winning a play-off following the final round at the British Open Golf Championship at the Old Course, St Andrews, Scotland, yesterday.

Jordan Spieth's spirited bid for a Grand Slam was stopped yesterday by fellow American Zach Johnson, who is no longer just a normal guy from Iowa.

Not with a claret jug to go with that green jacket.

Johnson captured his second major - this one at the home of golf - winning the British Open in a play-off over Louis Oosthuizen of South Africa and Australia's Marc Leishman that capped off five wild days at St Andrews and a suspense-filled final round.

Most eyes were on 21-year-old Spieth. No one ever came closer to the third leg of the Grand Slam.

Spieth fought back from taking four putts for a double bogey on No. 8 with back-to-back birdies. He rolled in a 50-foot birdie putt for a share of the lead with two holes to play. After missing an 8-foot par putt on the 17th hole, he needed a birdie on the closing hole to join the play-off.

"We gave it a great effort," Spieth said.

He joined Arnold Palmer, Jack Nicklaus and Tiger Woods - the three biggest names in golf over the last half-century - as the only players to capture the Masters and US Open, only to come up short in a quest for the holy grail in golf - all four professional majors in the same year.

Johnson won the Masters in 2007 and described himself as just a normal guy from Cedar Rapids, Iowa.

The 39-year-old Johnson now has two majors among his 12 PGA Tour victories, an astounding record and an example that a good wedge game and putter can still go a long way in this era of the long ball. Johnson was in tears when he was interviewed off the green, and he cradled the jug after his acceptance speech.

"I'm grateful. I'm humbled. I'm honoured," Johnson said. "This is the birthplace of the game, and that jug means so much in sports."

On a tense afternoon of shadows and showers on the Old Course, Johnson closed with a 6-under 66 by holing a 30-foot birdie putt on the 18th hole in regulation, and caddie Damon Green strutted and flapped his arms in his celebratory chicken dance.