In praise of Kingston College 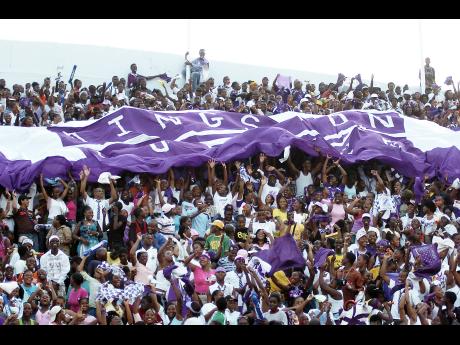 File
Kingston College supporters celebrating at the National Stadium during the 2006 Boys and Girls’ Athletics Championships.

There is no difficulty or discomfort in recounting that Kingston College (KC) has written an indelible chapter in the pages of Jamaica's sporting history. This columnist has been recognised at the highest level of international sport, for "real commitment to the field of athletics journalism over a long period of time", as well as having produced "a body of well-balanced and extensive work of the highest quality".

To sustain this brand it is essential to display sincere appreciation and high regard for this North Street institution whose contribution is at optimum levels.

That Kingston College could have 14 unbroken Boys' Champs triumphs (1962-1975), is an oasis that beautifies the nation's richly endowed sporting landscape. That record ranks high, as the main ingredient that sweetens the brew when their story of excellence is being recited. For their significant input, contributors, (for the most part, Old Boys) like Foggy Burrowes, Trevor Parchment, Freddie Green, Donovan Davis, Howard Aris, Teddy McCook and several other highly credentialed participants from a past and current world, need to be included in any catalogue of those creatively crafted conquests.

Purple Power was again played out in the local schoolboy football season in the 1964-1965 teams. Coach and father figure, the now departed George Thompson (affectionately, George T) and the inspiration and motivation that he transmitted, had implanted names in the minds of all lovers of the beautiful game. Under astute leadership, these folk heroes, rolled over all that was placed in their path to Manning Cup and Olivier Shield glory. They served up a menu of magic and ball artistry that saw spectators swell the Stadium on match day.

All this and more, not hitting the headlines as potently as '14 straight' or 'the 64/65 ball geniuses,' will be celebrated on Friday, July 31, 2015 with a fun, fÍte and frolic Fortis Festival at Witty's Lounge, situated in Savannah Plaza. The open air entertainment facility is operated by the popular city party promoter, himself a former Kingston College footballer.

Old Boys, family and friends, not excluding this columnist, are expected to travel from near and far to greet, sit with, stand beside, sip, snack, dine, dance up a hurricane, and reminisce about glorious and never-to-be forgotten years, spent on or close to the school's campus.

The following moments are mandated for recount, their impact then, inspirational, monumental, riveting and drama-filled, and years after, no less telling.

1. That 1956 Clovelly Park-executed, Mabricio Ventura, Sunlight Cup shot-filled innings of 78 or thereabouts, which along with lesser scores, but still crucial comeback contributions, by 'Billy' Hall, Keith Lumsden and Skipper, Maurice McLeod, that re-hoisted a limp Purple and White flag when Jamaica College had them on the ropes with top batsmen, Peter Taylor, Jimmy Richards and Meryck Miller, sent packing, early.

2. Albeit in a losing cause, when, in 1958, the same 'Mauve' after Cornwall's Danny Allen had sealed the Olivier Shield with two stunning early strikes, thundered a left footer into the red and gold net, rocking the entire Bay with its ferocious execution.

3. Calabar Old Boys present will want to recall 'Den Den', better known now as veteran Coach Dennis Johnson, stepping past the high knee - lifting Ventura, in the 1958 Boys Champs 220 yards final, in front of the KC Stand, while pointing at the head top of the shorter KC hero and making the whipping sign, as he motored to victory.

Kingston College is an institution of a lot more substance than the most important, morale building sports.

Let that be the theme and lasting memory of the night.