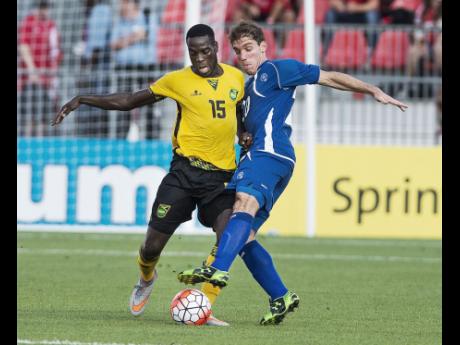 The last time Jamaica tackled the United States at the CONCACAF Gold Cup, they appeared primed for the battle, reeling off some good first round performances, including a 1-0 victory over Honduras at New York Red Bulls Stadium that was hailed as the country’s best display in decades.

In the Honduras game there were seven changes to the Jamaica line-up, as the team had already qualified for the knockout stage and players were rested for various reasons.

For the next match against the United States, in the quarter-finals, the same seven changes were made to the Jamaica team. They lost 2-0.

On Wednesday, both countries will meet in the semi-finals of the Gold Cup and Je-Vaughn ‘Hacker’ Watson, one of the players who provided some star quality in a wonderful offensive display that night in New Jersey is very much at the heart of Jamaica’s team again and believes the time is ripe for a win

"There’s no better chance to beat them than right now. We’ve a very good bunch of guys who are playing well both sides of the ball in attack and defence. We’ve to go out there and believe in ourselves and beat this team,” he said, after training on Tuesday at Emery University.

“The US are a hard fighting team, they’re going to put their best foot forward, no matter what, they’re not going to give up, whether they’re down 2-0, 3-0, we’ve to be disciplined and make sure we come out victorious,” Watson explained.

“Now I think the guys are more determined. We’ve a lot to prove as Jamaican players right now. You can see the difference, we’re not conceding goals like before. In the tournament we’ve played four games and we’ve only conceded two goals,” he pointed out.

Both teams are unbeaten, with three wins and one draw in four contests.

Jamaica have a losing record against the US, 13 losses, one win and eight draws. However, they have played strong in this tournament, registering five goals and conceding two, while the US have also been hot, pumping in 10 while letting in two.

Clint Dempsey has been their talisman, netting six of the goals, including his first hat-trick for his country in Saturday’s 6-0 quarter-final hammering of Cuba.

Watson says they will have to put a lid on Dempsey and Michael Bradley, the US’s other top player.

“They’re top quality players, Bradley and Dempsey. Dempsey is a good goalscorer, if he gets a half chance he’ll put it in; Dempsey is a guy who dictates the pace of the game, he’s always on the ball, so we’ll have to go out there and try to lock those players down,” Watson said.

The midfielder, who has won man of the match awards in two matches, missed the last game against El Salvador with yellow cards, as well as striker Darren Mattocks, who picked up a red  in the same match.

“The team vibe is good, I think anybody who goes out there is ready to die on the field. We’ve never beaten the US on US soil and everybody wants to make history and win the game. There’s no better chance than right now.”