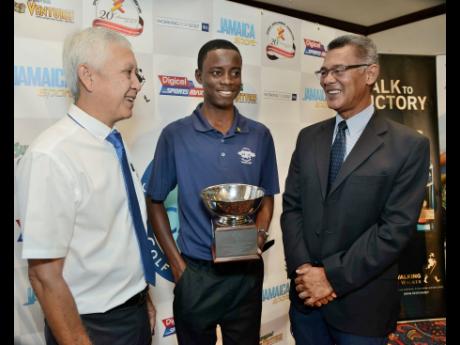 Young golfing standout, Romaine Evans, is hoping his boys' 17 and under Caribbean Amateur Golf Championships (CAGC) title, won in the US Virgin Islands recently, will be the start of a successful transition from amateur to the professional golf circuit.

He scored rounds of 79, 78 and 74, while ending the championships on 231 strokes, four ahead of Rodrigo Sanchez of the Dominican Republic.

Seventeen-year-old Evans' victory is a significant milestone for Jamaica. The island had not won an individual golf title at the championships for more than 10 years.

In a sport still considered one of the lesser disciplines here in Jamaica, Evans rose to the occasion and proved it was not where he was from, but where he is determined to go.

"It's really one of the best things I have ever done in my whole golfing career ... . To win this tournament is really a pleasure," Evans told The Gleaner.

"The Sandals Foundation has helped me a lot to fulfil my dreams and now it's been overwhelming and pretty much a good start to my career," he underlined.

The Tacky High School student has been a Sandals Foundation member and received financial and moral support to go on to accomplish a national feat.

Despite nearly six years' experience, Evans admits he remains a raw talent, still learning and growing in the sport under the tutelage of coach Bill Williams.

"My talent has grown, and every time I play a tournament, it just keeps on growing. I want to be a professional golfer, and I want to be a certified electrician in the future," he said.

Even after winning, Evans noted it was back to practice as always, at the Sandals Golf and Country Club.

"My golf game will be there. I hope to tee off with Tiger Woods one of these mornings and beat him for sure," he said of his pro career ambitions.

Young Evans recalls that he was first introduced to the game at age 12. He accompanied a friend whose dad was the pro at a golf course. Now he is hoping to make it a career.