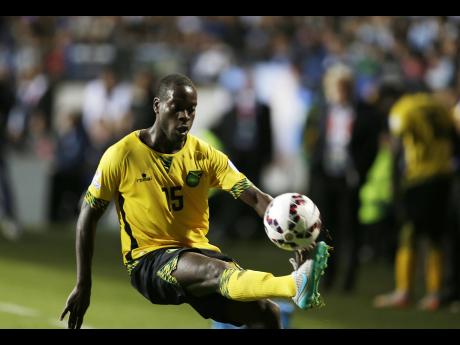 File
Je-Vauigh Watson ... will be a key player in midfield for Jamaica. 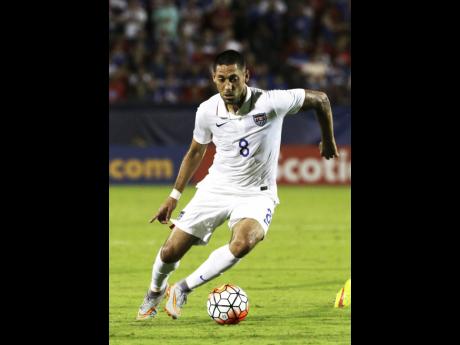 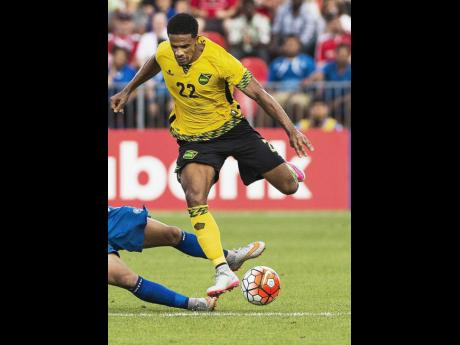 BELIEF and strength in unity. Those are the pillars on which Jamaica's senior men's national football head coach, Winfried Sch‰fer, has built his team, pushing forward at this CONCACAF Gold Cup with the motto, 'all for one, one for all'.

Those pillars will be tested by the United States of America, the defending champions, in their semi-final showdown at Georgia Dome here this evening, beginning at 6 o'clock (5 o'clock Jamaica time).

The match has a distinct German flavour, with Sch‰fer and 1990 World Cup hero, J¸rgen Klinsmann, heading the teams' coaching staff.

"David against Goliath," was how Sch‰fer described the clash yesterday between the 34th-ranked Americans and 76th ranked Jamaica. "Everybody wants Mexico-US in the final. But we're not finished; like David, we want to win against Goliath."

He added: "Tomorrow is a fight; we have 11 players, two German coaches, 68,000 people against us. The German style is discipline, fitness, heart and fight."

The team was instructed to change its predominantly yellow outfit to green, but Sch‰fer chose to look at the brighter side.

"Green in German means hope. Maybe green is our hope against the States," he noted. "I've confidence in my team and our team spirit. What is important is everybody gives 100 per cent."

The coaches have done much to instill a level of discipline in their team's mentality and approach, which will be key in strategising for a place in Sunday's final at Lincoln Financial Field in Philadelphia.

"The semi-final is not the finish. I want to go in the big stadium in Philadelphia on Sunday, not Saturday," Sch‰fer said about the preceding third-place play-off.

The Reggae Boyz, the Carib-bean champions, have never played in the Gold Cup final, while the Stars and Stripes have done so on nine occasions, winning five times.

In previous tournaments, the Jamaicans have been in the semis twice, 1993 when they finished joint third and 1998, when the Boyz historically qualified for the first World Cup final.

Mexico are the all-time Gold Cup winners, knocking off six titles. They are on course to add a seventh, being involved in the other semi-final matchup at 8 p.m. (7 p.m. Jamaica time) against Panama.

Mexico's earned their place with an undeserved penalty in the last minute of extra-time to oust Costa Rica 1-0 on Andres Guardado's goal in the quarter-finals, while the Panamanians beat Trinidad and Tobago 6-5 in a penalty shootout, after both teams finished 1-1.

The United States and Jamaica had contrasting quarter-final results, with the Americans routing a weak Cuba team 6-0 while Jamaica were taken to task in a 1-0 victory over Haiti, as centre forward Giles Barnes scored at the seventh minute.

Klinsmann liked the way his team looked: "I think we're in a very good spot going into the semi-finals in Atlanta. Our goal now is to win the Gold Cup."

He added: "It'll be a very tough match on Wednesday night in Atlanta."

Clint Dempsey leads the tournament in scoring with six strikes and his team has a 13 wins, one loss and eight draws record against Jamaica in senior team matches, with the Reggae Boyz first and only win coming in a World Cup Qualifier at 'The Office' in 2012.

Given the way the teams match up, with Jamaica's overall quality and strong defending, plus the US' general straightforward attacking style, the Jamaicans have a very good chance to win.

Dempsey will be key for the US, who have scored 10 goals while conceding two, along with Michael Bradley, who is good at finding space in midfield, from which he engineers offence with his passing skill.

"It's a very good team, athletic team, physical team so we know it will be a very difficult game," Bradley predicted.

"Our mentality is six games, one at a time, we want to lift the trophy. Right now, we're four down," he added.

Key Reggae Boyz are out of the Jamaica squad for today's matchup. Centre half Jermaine Taylor picked up a hamstring injury - that required surgery - in their group stage 1-0 win over El Salvador in Toronto; scoring fullback/midfielder Demar Phillips is also back with his club through injury; and Alvas Powell turned his back on his country by walking out of the team after their Toronto victory.

Sch‰fer though, has always focused on the players at hand, noting: "We need all players to win. We've 23 players and I trust all my players."

Two of his most trusted, central midfielders Je-Vaughn Watson and striker Darren Mattocks, will add depth to his squad after missing the quarter-final tie through suspension.

"I've more possibility for changes," Sch‰fer observed. "Both players know about the States because they play in the MLS."

Watson, with quickness of feet, plus the ability to pass with both feet and defend, has been instrumental for Jamaica in the centre of the park with hardworking captain, Rodolph Austin.

Their work has been complemented well by the experienced Joel (Jobi) McAnuff and effective Garath McCleary, in a Jamaica team that has grown much in stature to the one that faced the US at the Gold Cup, in the 2011 quarter-final.

"We should not fear them," said central defender Michael Hector. "Obviously, they're a good side, they're in their backyard and they're doing well. We've got respect, but sometimes it goes out the window when it comes to the game.