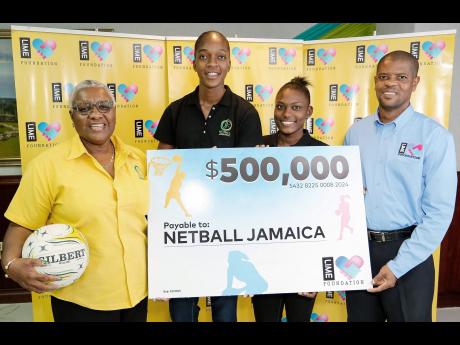 Contributed
Marva Bernard (left), Netball Jamaica's president, receiving a cheque for $500,000 from Courtney Bell, community programmes manager at the LIME Foundation. The donation will assist the Sunshine Girls on their quest for 'gold' at the upcoming Netball World Cup in Sydney,Australia. Players Kadia-Ann Dehaney ( second left) and Khadijah Williams (second right) share in the moment.

The LIME Foundation has provided support to the tune of $500,000 for the Sunshine Girls as they prepare to compete at next month's Netball World Cup in Sydney, Australia.

Speaking at the handover which took place at the LIME corporate office yesterday, Marva Bernard, president of Netball Jamaica, expressed gratitude to the company saying: "We are deeply humbled that after all these years LIME still has a line to the Sunshine Girls and has found it fit to continue this relationship and support these young people (the team) on their quest.

"It takes a lot to send 22 persons to Sydney and we are happy that LIME has not only answered our call for support, but also has provided an avenue for the average Jamaican to get on board," Bernard continued. Currently, donations are being accepted via text line (444-GIVE) hosted by LIME.

Courtney Bell, community programmes manager, who made the presentation on behalf of the LIME Foundation, said the company was glad to contribute.

"We are happy to be able to cheer on the Sunshine Girls on their quest for 'gold' and our donation is a signal of our ongoing commitment to Jamaica's youth." Bell also encouraged members of the public to contribute through the text line.

LIME's involvement with the Sunshine Girls began in 1999 with the donation of the national team bus. The company was also the lead sponsor of the World Netball Championships, hosted in Jamaica in 2003.