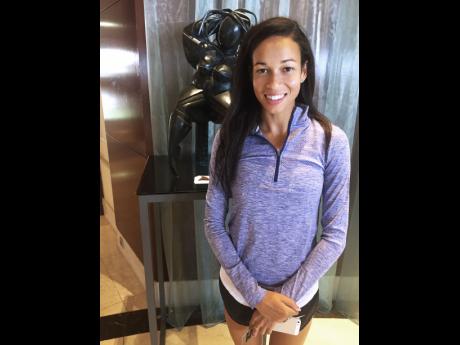 How does a girl from the banks of the Mississippi River come to be on the verge of representing Jamaica - of all events, in the 3,000 metres steeplechase at next month's IAAF World Championships?

A Jamaican in the steeplechase isn't a totally unusual occurrence, but the bright-eyed Aisha Praught likens her Hollywood-style twist of fate to one of her favourite movies.

"It's like you grew up watching the movie Cool Runnings and I'm here now doing my own weird thing," she laughed.

The 25-year-old Oregon-based distance runner told The Gleaner that meeting her Jamaican father for the first time, two years ago in Berlin, played a big role in her decision to represent the Caribbean island that she has always felt deeply connected to.

"I'm really excited, this will be my first appearance at the World Championships and I'm looking forward to having a spot on the line. Anybody on the line has a shot at doing something great so I'm excited about that," said Praught, who was born in Wisconsin but grew up in Illinois, USA.

Now, with a few weeks to go before Jamaica, known for its sprinters, enters athletes in the men's 5,000m and women's 800m in Beijing, Praught, who started out a sprinter, is hoping that she can help to drive new interest in the middle-to-long distances.

"I think there is a wealth of distance-running talent that Jamaica has not realised yet. When I was in Jamaica at the trials, I was looking at the body types ... it's (distance running) probably not the cool thing to do, but I was really encouraged at the championships," said Praught. "I spoke to a lot of them and I hope that more people will get involved and maybe that we can put it on a bigger level and some of the young Jamaicans can be inspired and try it."

"I think that I could potentially make a bigger impact that way and I hope to inspire someone, even just to get another pair of eyes on the event, get maybe a couple of kids curious. Maybe they have been running around and they are not the fastest, but they can outlast everyone else, maybe they will turn to the sport and distance running," added Praught, who is already planning to return to Jamaica after the World Championships.

The athlete who made her first trip to the island to compete at the National Senior Championships a few weeks ago, where she won the 1,500m in 4 :15.92, admitted that she never really considered representing the island until meeting her father a couple years ago.

"I grew up knowing I was Jamaican, but I really didn't know my father until I was an adult. I sort of just grew up with the knowledge that he was there, but I didn't meet him until the summer of 2013 when I was in Europe, and he lives in Berlin. Our meeting was really life-changing; just looking into his eyes for the first time was really incredible," Praught shared. "It's like there was no time, like we always knew each other."

"It sort of felt serendipitous, it was like, all of a sudden, that was my identity. It was such a warm and welcoming feeling; it felt real and genuine and I felt like a part of myself that had been missing was suddenly there, and it just felt right," she said of her subsequent decision to represent Jamaica.

Now, Praught, who competed at the recent IAAF Diamond League meet in Monaco where she was the pace-setter for the women's 3000m steeplechase, can hardly contain her excitement at the chance of wearing Jamaica's gold singlet in Beijing next month.

"I am so excited and a lot of my friends - I am pretty close with a lot of the American female steeplechasers and it has been the big topic. They are like 'As soon as you get the kit, you have to send us some pictures," Praught exclaimed. "Everyone is a little jealous, Jamaica is the coolest team in athletics and putting on that vest is going to feel amazing. I picture it every day and I can't wait to see it."

Praught will be the first Jamaican entrant in the 3,000m steeplechase at the World Championships since Mardrea Hyman at the 2011 edition in Daegu. Hyman failed to finish in Daegu, as well as the 2008 Olympic Games, her last two major championships. Korine Hinds also represented Jamaica in the event up to the Daegu World Championships.