Pan Am gold for Richards 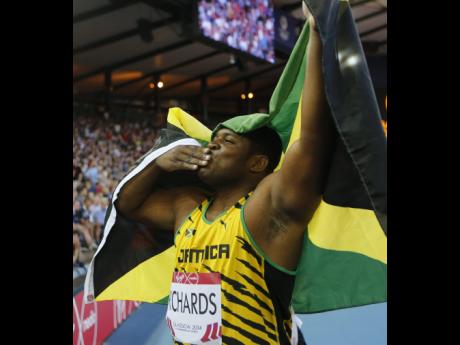 Richards won the event in a meet record and season best 21.69 metres. His mark beat the 21.30m set by Canada's Dylan Armstrong four years ago in Mexico. Timothy Nedow of Canada was second yesterday with 20.53m as German Lauro of Argentina threw 20.24m for bronze. Raymond Brown of Jamaica was ninth with 18.39m.

Both Jason Livermore and Sheldon Mitchell are also through to today's men's semi-finals after finishing second and fourth in their heats of the men's 100m. Livermore clocked 10.09 behind the Canadian, AndrÈ Glass who won in 10.06. Mitchell was timed in 10.14 behind winner, Beejay Lee of the United States in 9.99.

Demar Forbes is in today's long jump final. Forbes finished third in Group B of the qualifying round with 7.67m.