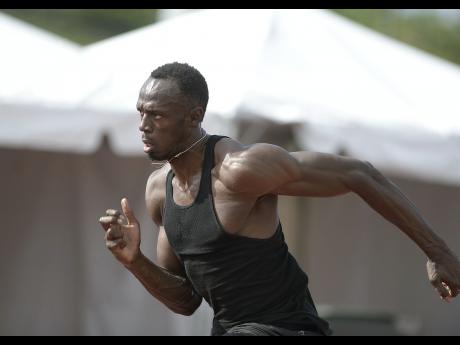 He may be the 'fastest man on the planet', but Jamaican sprinting superstar Usain Bolt has not shown that speed for nearly two years now. However, there's quiet confidence that this is about to change.

With the sport's poster-boy getting ready to apply the gas to his season, after an unflattering start in his preparations for a triple title defence at next month's IAAF World Championships in Beijing, China, indications are that tomorrow's Sainsbury's Anniversary Games - London Diamond League will see the return of a high-velocity Bolt.

The sprinter has only competed in a single 100m race to date - a largely promotional affair along a stretch of beach in Brazil, where he posted a time of 10.12 seconds. A recent setback, which saw him jetting to Germany to consult with his doctor Hans-Wilhelm M¸ller-Wohlfahrt, coincided with his withdrawal from Diamond League stops in Paris and Lausanne at the top of the month, sending panic among his supporters.

However, the 28-year-old world and Olympic 100m and 200m champion is said to be in cracking form heading into tomorrow's 100m assignment, where the likes of Ryan Bailey, Nesta Carter, Mike Rodgers, Jimmy Vicaut, Kemar Bailey-Cole and James Dasaolu - all ready to provide a solid test for the big Jamaican are also entered in the two-round set-up.

Bolt has spent the better part of the last month working out without issue under the gaze and direction of his coach, Glen Mills, and the rest of his Racers Track Club teammates at Brunel University, and despite a forecast of showers and 12?C conditions in London around race time, many close to the world 100m and 200m record holder are confident that the sprinter is primed to drop a fast time inside the London Olympic Stadium.

It would be a welcome sign for supporters of the Jamaican, whose last time under 9.80 seconds came in the final of the 2013 World Championships in Moscow, Russia. That is his only sub-9.80 seconds clocking since the final of the London Olympic Games a year earlier, where he posted a time of 9.63 seconds after similar doubt in the build-up to the games.

It could even be argued that it's increasingly important that Bolt show some kind of form tomorrow, considering his rivals - particularly Justin Gatlin, the only man to dip below 9.80 seconds this year - all seem to be in top condition.

Nonetheless, the reports are positive and though it matches the tune heard ahead of the New York Diamond League, where Bolt posted a modest 20.29 in the 200m, those who should know seem extremely comfortable with the sprinter's readiness heading to tomorrow's test.

It's left to be seen, but the site of one of Bolt's greatest weeks - a triple gold medal treat at the 2012 Olympic Games - may also serve as the stage for his first real statement this season.