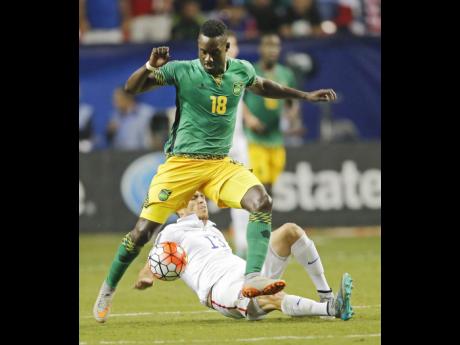 File
Jamaica’s Simon Dawkins (18) gets past United States’ Ventura Alvarado (13) during the second half of yesterday's CONCACAF Gold Cup semi-final in Atlanta. 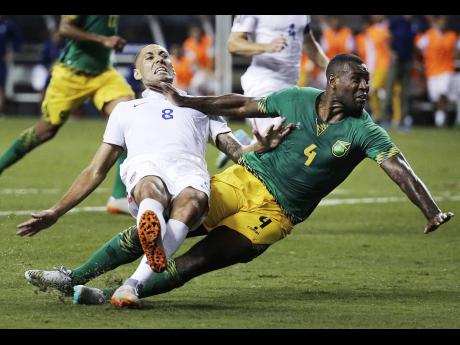 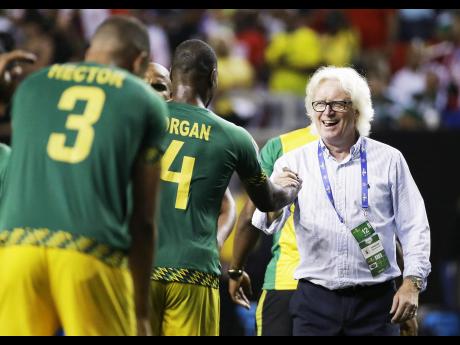 THE Georgia Dome gave the Reggae Boyz a standing ovation.

It was a fitting tribute to Jamaica, which scored a historic victory over the United States while booting away a number of firsts yesterday in Atlanta, beating the Americans for the first time on their home soil, 2-1 in the semi-final of the CONCACAF Gold Cup football tournament.

"David won against Goliath," said Jamaica's head coach, Winfried Sch‰fer, who had described the match as such.

"I'm very proud of my players. Two strikers made the goals for Jamaica, I am very, very happy about this," he added.

"We're not finished, we've one more match. We cannot make a party now, we can play Bob Marley later."

Now Jamaicans are headed to the Gold Cup final for the first time, being the first Caribbean team to make that landmark.

"We've made history by getting into the final," noted Barnes of Jamaica, which had twice made it to the Gold Cup semi-finals - in 1993 when they placed joint third, and 1998. "We're looking forward to the final now; hopefully we can win it," he added.

Mattocks scored with a header that hit the far post on its way in, off a long throw-in from Kemar Lawrence at the 31st minute, while Barnes scored with a brilliant curling free-kick the 36th, after US goalie Brad Guzan was adjudged to have handled the ball by stepping out of the penalty box as he attempted to kick the ball upfield.

"To see it going in was sensational," Barnes said of his goal.

It was one of several spills by Thompson, who otherwise made some brilliant saves against the Americans, who outshot his team with 18 kicks on target, as opposed to Jamaica's four.

Both teams created chances to score in a very competitive fixture in which the Americans made most of the running, with 58 per cent possession. However, without skilful players to bother the Jamaican defence, they hit a lot of long passes and crosses, especially in the opening 15 minutes of the second half.

This tactic suited the strong-defending Jamaica team led by tall central defender Michael Hector, as they were able to outjump the American attackers.

Additionally, the second balls won off the headers were used by Jamaica to start counter attacks, with Je-Vaughn Watson, Rodolph Austin, Joel (Jobi) McAnuff and Garath McCleary pushing back the Americans.

Watson had a monstrous two-way game and McAnuff, especially, utilised all the craft and experience of his 33 years to keep possession, while the strikers fought bravely while being outnumbered to hold up the ball until help arrived to press forward.

The goals came when Mattocks skillfully flicked the ball on one of the few times he beat the American defence to a high ball, while Barnes curled a free-kick with ferocity from the top of the box.

Jamaica tightened the screws on Bradley after he took advantage of the Thompson spill, forcing him back to his defence and made his and his team's task difficult. It became so hard against Jamaica's very organised team defence that without a way through, they resorted to long balls from deep and wide.

In the end, those hardly mattered against a Jamaica team that held strong to become the first Caribbean team to beat the United States in a men's senior football match in the US since Haiti did so in 1969.

"The team is disappointed because they wanted to play the big final in Philadelphia," admitted US coach, Jurgen Klinsmann.

"Congratulations to Jamaica being in the final."

Klinsmann added: "I cannot complain about the performance about the team. We had enough chances to put the game away."